U.S. stocks tumbled Thursday as the torrid rally in equities came to a screeching halt amid economic jitters. Treasuries climbed.

Airlines, cruise operators and travel companies that surged in recent weeks bore the brunt of the selling. The KBW Bank Index sank 7.8%, and energy shares joined a slide in oil.

While much of the equity selling owed to the frantic pace of the recent rally, sentiment did sour as signs mounted that a possible second wave of the pandemic could be taking hold in some states. U.S. jobless claims remained high, underscoring the longer-term challenges caused by the pandemic. The report came out a day after the Federal Reserve provided a dour outlook on the economy. 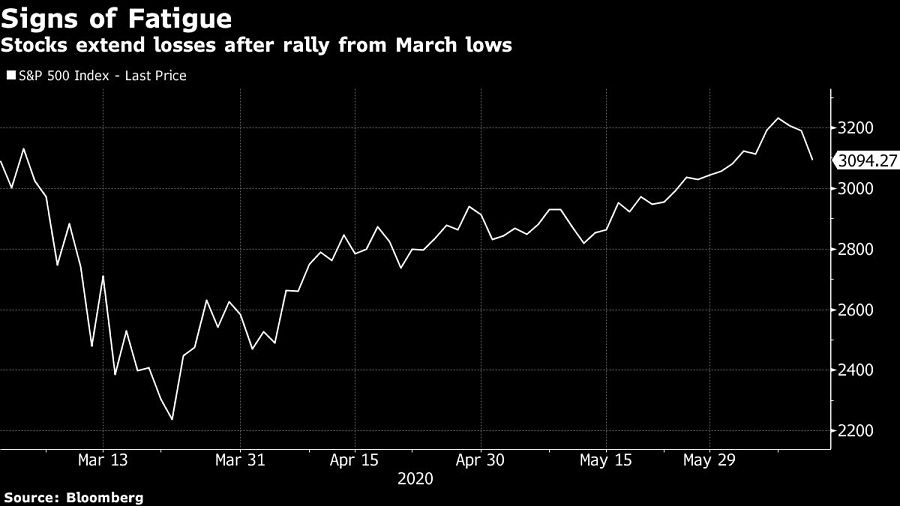 “The move from the bottom in terms of the rally has been so mind-boggling. Over the new few weeks, we could see some pullback,” said Solita Marcelli, deputy Americas chief investment officer at UBS Global Wealth Management. “That’s mostly the fears of second wave concerns going higher, also we had the Fed yesterday. Their assessment of the economy was a little bit weaker than what the market expected.”

Treasury Secretary Steven Mnuchin said the U.S. shouldn’t shut down the economy again even if there is another surge in coronavirus cases.

As restrictions are lifted across the country, signs of a second wave of cases have been raising alarms. More than 2 million people in the U.S. have been infected so far. The localized surges have raised concerns among experts even as the nation’s overall case count early this week rose just under 1%, the smallest increase since March.

“Sentiment has become much more cautious,” said Shawn Cruz, senior manager of trader strategy at TD Ameritrade. “We actually started to get data that indicated reopenings are going extremely well, and now we’re starting to get some of the headlines that maybe the reopenings are going to at least pause.”