Mattresses full of money, getting paid to take out a mortgage, surging demand for safe-deposit boxes — these are some of the ideas people have about what happens when interest rates turn negative.

Just a few months ago, such scenes — at least in the U.S. — seemed unthinkable. But with Treasury yields tumbling and the Federal Reserve abruptly slashing rates to near zero on Sunday, Americans may soon get a taste of them firsthand.

Panic over the coronavirus and its threat to the global economy has made the prospect of negative rates in the U.S. at once all too real. Americans are currently staring at Treasury yields closer to zero than they were during the 2008 financial crisis. JPMorgan Chase & Co. says the odds are rising that Treasury bills will go negative and hurt savers in the $3.8 trillion money-market fund industry. Indeed, traders in Asia woke Monday to quotes below zero on some bills. 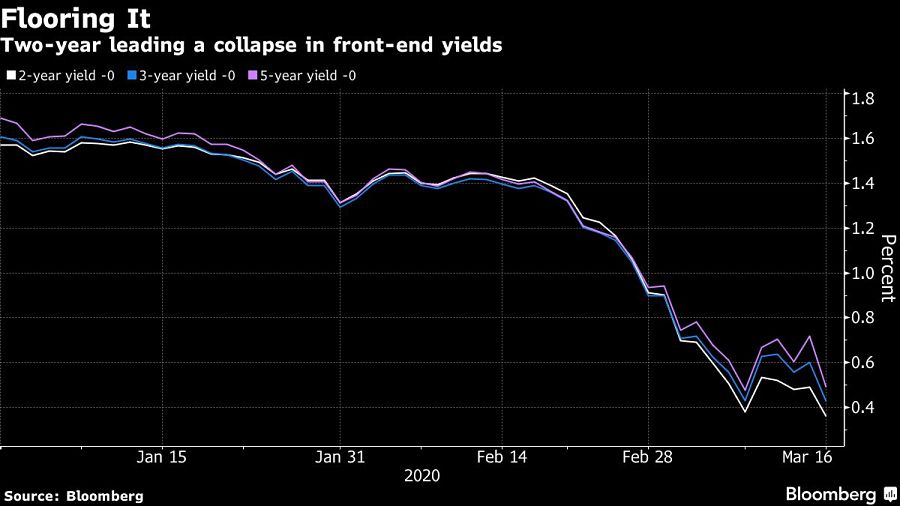 How might it ultimately play out for ordinary Americans? Our best guide comes from across the Atlantic, where years of negative rates have already upended the financial lives of millions in major ways — collateral damage in a largely failed experiment by European policy makers to spur the region’s economy.

The most obvious effect has to do with savings. Textbooks say low or negative rates should encourage savers to put money to work to earn a higher return, yet many are hoarding more cash despite getting little or no interest on their bank accounts. For instance, German household savings have jumped to 11.2% of income, the highest in over a decade, and savings rates in Denmark and Sweden are near all-time highs.

That’s because European banks have been sucked into that vicious cycle too. Although they now have to pay to keep reserves with national central banks, banks have been reluctant to pass on much of that cost to consumers for fear they’ll lose clients. Denmark, an early adopter of negative rates, introduced fees on larger balances only last month, for example.

Meanwhile, demand for business loans in the euro area has been slowing from its peak in 2016, and stalled in the middle of last year, leaving banks with little to do with their deposits. That’s led their profits — and stock prices — to sink.

“I’m Portuguese, I have family in Europe, you get calls from the bank, they don’t want your cash,” said Bruno Braizinha, director of U.S. rates research at Bank of America Corp.

A similar bind might await U.S. lenders. American households are once again ratcheting up their savings, with the rate now at 7.9% of disposable income. At the same time, demand for bank loans from medium and large corporations has waned, according to a Fed survey of senior loan officers.

While the U.S. banking sector is better positioned than its European peers to weather zero rates, a historically flat yield curve — where yields on short-term notes rise above those on long-term bonds — has already eroded profits, making investors nervous. U.S. bank stocks have fared worse than the rest of the market this year, with one gauge slumping 45%.

The “economic perversity” of negative yields, whereby people save more to compensate for a lack of returns, can stifle consumer demand, weigh on growth, and thereby necessitate lower rates for longer, according to Helge Pedersen, chief economist at Nordea Markets.

Some European pension funds have attempted to break the cycle and step out into riskier territory. Fueled by what a 2016 Aviva study identified as an annual savings gap of 2 trillion euros, some funds have ditched low- and negative-yielding assets for more lucrative investments in private credit.

That’s raised eyebrows among regulators, and could develop into a potential risk in the U.S. as well. Not only is a large swath of corporate pensions underwater, more and more Americans rely on defined contribution funds like 401(k)s, which have taken steep losses because of the coronavirus.

For the well-heeled, safe-deposit boxes in tax havens like Zurich and Geneva are back in vogue. Since the aptly named Swiss Gold Safe began offering them in 2015, demand has been “extraordinary,” a spokesman for the high-security vault operator said late last year.

Another potential area of growth in a negative-rate world could come from real estate. Ultra-low borrowing costs have helped turbo-charge property markets in Europe. Home prices in Lisbon have doubled since 2012, helped along by a now-canceled “golden visas” incentives program for foreign investors. In Denmark, negative mortgages are actually a thing. There, it’s possible for prospective buyers to get a 10-year home loan at a rate of minus 0.5%. (Though banks charge a raft of fees on such mortgages to make money.)

A similar, but less extreme, situation is already starting to emerge in the U.S. As yields fall, mortgage rates have tumbled to record lows — a potential boon for home sales. Loan applications have already picked up and several lenders are planning a hiring spree to keep up.

The flip side, of course, is that a sharp pickup in home prices could put a further dent in affordability, a challenge that’s prompted a rent freeze in Berlin, for example. It may also raise the risk of a boom-and-bust cycle like the one Sweden is now grappling with. There’s also some evidence to suggest that sub-zero rates can contribute to rising income inequality, OECD data show.

But all this may still be some way off. Negative rates in Europe are anchored by central-bank policy, and Fed Chairman Jerome Powell has repeatedly rejected that step — despite harangues from President Donald Trump.

And even if sub-zero rates come to pass, Dan Ariely, professor of behavioral economics at Duke University’s Fuqua Business School, says he wouldn’t be surprised if Americans took a slightly different — though no less problematic — approach to their European peers. U.S. reliance on credit-card borrowing has him worried that loss aversion will push people in the U.S. to spend more than they should, bringing about a whole new set of concerns.

“If your money was deposited in something and you saw it losing, for sure, all te time, it would just be painful,” Mr. Ariely said. “I remember after 2007, 2008 when the interest rate on regular deposits in banks went down so much that a lot of young people, in particular in the U.S., said, ‘Why should I save?’”