Eleven years ago, as the global economy reeled from the ravages of the financial crisis, stocks strung together a little run that lifted the Dow Jones Industrial Average about 10% in four days.

Nobody knew it then, but it was the start of a rally that would ultimately add $20 trillion to equities and become the most enduring in history.

Now, the bull market that nobody saw coming has ended the same way it began — amid panic and with little warning. Based on when it last hit a record, the Dow plunged 20% from Feb. 12, and investors who had only just begun to wade back in are getting crushed by a global health scare that has, thus far, resisted every effort to halt. (Inconveniently for market statisticians, the bear market arrived first in the Dow and not their preferred gauge, the S&P 500.) 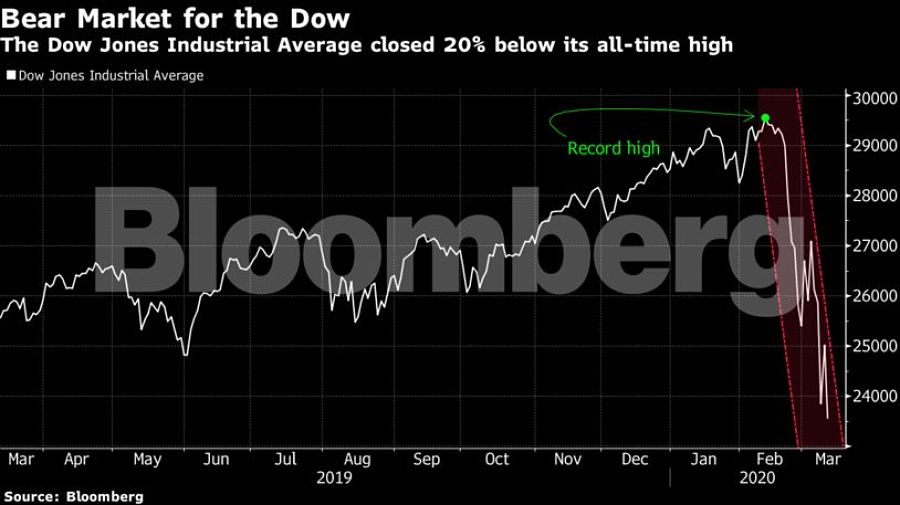 In the end, it was one more crisis than could be contained by the market’s guardians. What set apart this bull market was, of course, the Federal Reserve. In modern history, no rally has been more closely associated with the central bank — and its unprecedented experiments in monetary policy —than this one. But policy makers who had so successfully shielded investors from credit crises, subpar economic growth and all manner of market turmoil, had no answer for a virus threatening to cause a global recession.

“What changed during this bull market is we assumed the Fed could solve everything. If this becomes a global demand problem, the Fed won’t be as able to help — not with conventional policy,” said Peter Tchir, head of macro strategy at Academy Securities.

It’s testament to the power of the advance that a plunge as violent as this one has lowered the annualized bull market return by less than 2 percentage points. If by a miracle you bought at the bottom, you’re still sitting on handsome gains — about 15% a year. Someone who waited 12 months before jumping in is doing fine, too.

“The bull market became an old friend and maybe we took its ability to fly for granted a bit too much, its ability to continue to power on,” said Marvin Loh, senior global macro strategist for State Street. “It was unique, it was euphoric. It made a lot of people feel great. But a lot of people didn’t participate as much as they could have, also.”

Not everyone will mourn an era whose early stages were fueled by Ben Bernanke’s controversial approach to stimulus, experiments with names like quantitative easing and Operation Twist designed to spur investment by pushing banks and individuals out of the fixed-income havens to which they flocked during the crisis. Every time the rally threatened to collapse — and shares twice before came within points of losing 20% — central bank pronouncements breathed new life.

“Looking back on this bull market, financial textbooks will be rewritten to start with central bank policy,” said Matt Miskin, co-chief investment strategist at John Hancock Investment Management. “And that section could equate to nearly half the content.”

The rally was a monster by many measures. At its peak on Feb. 19, the S&P 500 needed to climb about 3% more to eclipse the return of the mother of all bull markets, the dot-com frenzy that lifted it 545%. At the same time, its slow-and-steady nature kept it out of the ranks of the fastest. Going by the S&P 500 — which isn’t in a bear market, technically — the 18.3% annualized gain at the top is actually smaller than all but one of 12 previous bull markets.

Its biggest claim to history is its length. While a robust debate exists among wonks over how to date bull markets, most statisticians consider this to be the most durable on record. It lasted 11 years and two days and featured two calendar years in which the total return exceeded 30%.

The unrelenting climb has made U.S. stocks the envy of the world for a decade. In the past 10 years, the S&P 500’s gained more than 135%, compared with an advance of about 60% in the MSCI All-Country World Index. Emerging market stocks fell around 2% over that period.

“It was an all-American bull market. It paid to be provincial,” said Doug Ramsey, chief investment officer at Leuthold Group. “Toward the end, consumer discretionary did exceptionally well, especially considering we came out of a massive consumer recession. That’s an all-American thing: consumption.”

Amid Europe’s credit crisis, a downgraded U.S. credit rating, the flash crash, the rally struggled to gain converts early on — some wags called it the most hated bull market ever. In the later stages a different sort of contempt began to emerge, from struggling American wage earners who saw equity returns as a Fed-fomented gift to the 1%. At various times in the past decade the return on the S&P 500 has exceeded growth in worker pay by the most on record. Four tech megacaps have seen their value jump over $1 trillion.

That aside, for anyone depending on the market for old-age money, the sight of the plunge has been harrowing.

“Someday I’ll tell my grandchildren how our generation rode an investment fad that overweighted stocks in our portfolios from the highs down to the lows, leaving us with less than we hoped for in retirement,” said Chris Rupkey, chief financial economist for MUFG Union Bank. “The end of the bull market really means an end of confidence in our own futures. We’ll never see a repeat of 2019’s 28.8% gain in the S&P 500 again.”