Cratering U.S. Treasury yields may be eroding the haven quality of some of the world’s safest assets, according to a growing chorus on Wall Street.

Goldman Sachs Group Inc. says the coronavirus panic-driven plunge in yields makes the sovereign debt vulnerable to a correction, while BlackRock Investment Institute said Treasuries are getting weaker as protection when stocks sell off. Cash and bills may be the better defensive bet now, according to Tallbacken Capital Advisors.

“One question to ask is if nominal bonds still carry the same insurance value,” Goldman analysts Praveen Korapaty and Avisha Thakkar wrote in a note. “Unless central banks show a willingness to cut deeply into negative territory, we think the answer is no, at least for the larger bond markets like the U.S., euro area and Japan.” 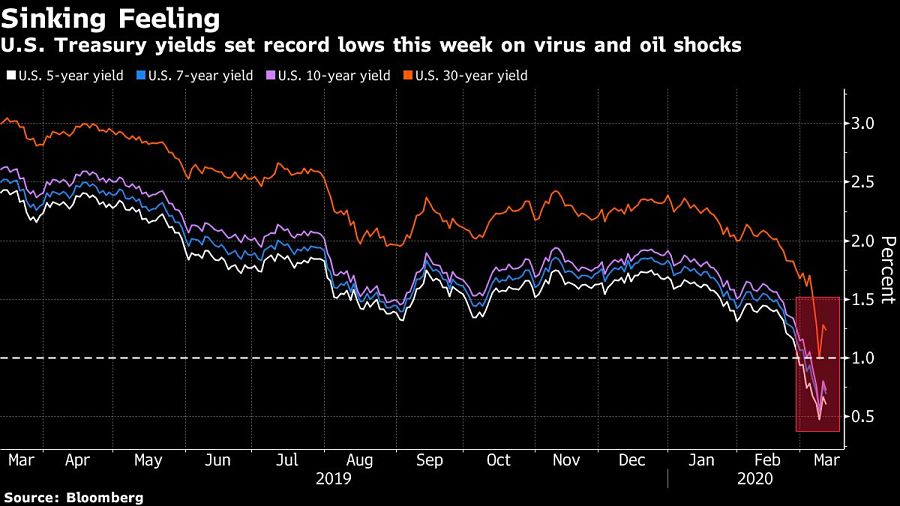 Yields on 10-year Treasuries have plummeted as much as 160 basis points this year, reaching a historic low of 0.31% on Monday as soaring virus infections globally and a shock price war between the world’s biggest oil producers sent investors rushing for shelter.

They have moved more than 10 basis points for each of the past five days. The Bank of America Merrill Lynch MOVE Index, which measures implied price swings in Treasuries, rose Monday to its highest level since June 2009.

‘Great profits’Investors who bought longer-dated U.S. bonds would have made “great profits,” but now may be the time to sell, according to Michael Purves, chief executive at Tallbacken.

“We think there is risk of aggressive profit taking and for yields at the back end to rise,” Mr. Purves wrote in a note. “We suggest cash/bills is the real safe haven right now, and not the 10 or 30 year.”

While BlackRock favors Treasuries over lower-yielding peers, it’s increasingly wary of their effectiveness as a hedge as daily market swings become more volatile.

“We recognize Treasury allocations are playing their role during moments of high uncertainty, but see risks of a diminishing buffer against equity market sell-offs and a snap-back in yields from historically low levels,” according to a Tuesday note from the company.

“Ten-year U.S. Treasuries yielding 0.8% is not good value in an environment where the situation normalizes,” he said. “Yields will start to rise again, and you can make some capital losses by owning Treasuries.”