The market meltdown is forcing equity investors to confront worst-case scenarios they normally delegate to colleagues in credit: Which companies can survive a slowdown, and which are teetering toward extinction?

The urgency of the assessment is a sign that stock managers have entered survival mode as credit spreads spike. Companies with strong balance sheets have generated “extraordinary returns” on a relative basis since the S&P 500 peaked Feb. 19, according to Goldman Sachs Group Inc.’s chief U.S. equity strategist, David Kostin. Their weaker counterparts have gotten trounced.

The distinction was a gaping one on Monday. A Goldman basket of lower-quality names trailed the one with fortified financials by most since November 2008. The bank sorts out the strong from the weak according to five metrics: working capital to assets, retained earnings to assets, operating income to assets, leverage ratio and sales to assets. 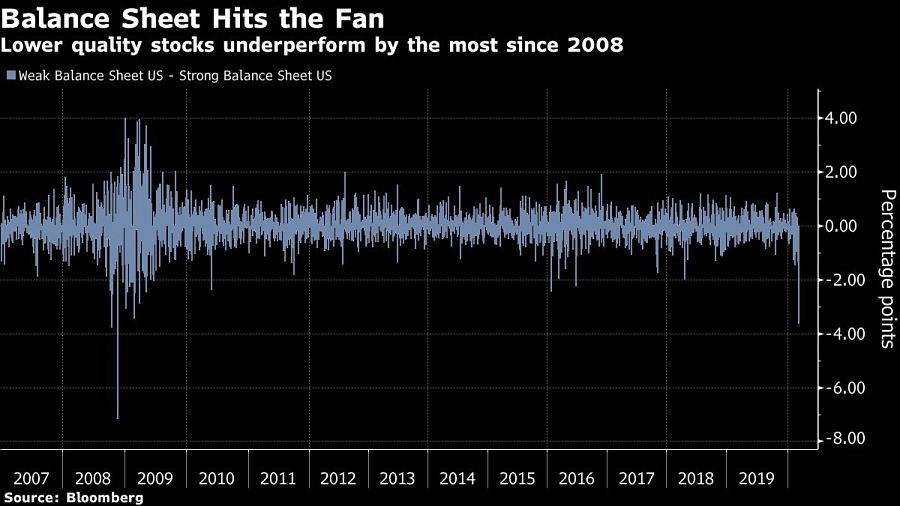 With oil’s rout exacerbating an already shaky situation, balance-sheet strength is emerging as a key port of safety in the swelling storm.

The market-neutral profitability factor, which is closely related to quality, is the best-performing portfolio tracked by Bloomberg since the S&P 500 peaked. Value is the poorest.

Names like MasterCard, Visa, Nike, Humana, Kroger and Colgate-Palmolive populate his list of high-quality companies that are rated outperform by the firm.

The hyper-focus on quality stems from growing fears that the negative impact of the coronavirus coupled with an all-out oil price war will be substantial enough to spur a credit crunch. The IShares iBoxx High Yield Corporate Bond ETF (HYG), which has a major weighting toward energy bonds, was down 4.7% as of 3:00 p.m. EDT Monday, its worst loss since 2009. Its investment-grade cousin (LQD) suffered its biggest blow since Aug. 11, 2011, when the debt ceiling drama and downgrade of the U.S. credit rating roiled markets.

“Moves that we are seeing right now in equities and other financial assets don’t come around very often, and while they are the result of developing economic conditions and uncertainty, the moves themselves will ultimately also have their own economic impacts,” analysts at Bespoke Investment Group wrote. “This sort of price action indicates a broad and sustained pullback in economic activity, on top of massive stress in credit markets.”

In Ed Yardeni’s worst-case scenario for how the coronavirus will play out, junk bonds and the least-creditworthy portion of the investment-grade market — in his words, “our economy’s corporate zombies” — will end up taking it on the chin.

“If investors stop reaching for yield and instead reach for quality, the result would be a severe credit crunch that would bury lots of zombies,” the president of Yardeni Research Inc. wrote. He assigns only a 10% probability to such an outcome.

Hindsight is 20/20, but the credit markets were already portending further pain for stocks.

Spreads on the Markit North American Investment Grade Index, a derivatives index tied to the credit default swaps of a basket of high-grade corporate debt, widened by more than 15 basis points last week, but the S&P 500 managed to eke out a gain of 0.6%. During the past five years, stocks slumped at least 3% in sympathy when spreads blew out by at least 12 basis points on a weekly basis. Equity losses in the final week of February, by contrast, were relatively in line with what would have been expected given the magnitude of the widening in IG CDX.

The collapse in oil prices is wreaking even more havoc on the related high-yield CDX index. Spreads have gone parabolic to well above 500 basis points, a surge which constitutes a five-sigma event relative to the three-month average. This is a faster move than during the 2015 oil price collapse, though the outright level of spreads is tighter at present.

Matt Rowe, chief investment officer of Headwaters Solutions, sees the recent price action as a long-overdue awakening to the worst-case scenarios embedded in any credit position.

“With a pandemic crushing global growth, rates closing in on zero and crude near $30 we are forced to reconsider the ‘jump to zero’ node of a trinomial tree,” he wrote. “It is time to prepare for corporate failures and the crystallized damage this will do to portfolios that may or may not even know they have this exposure.”