The swirl of fresh coronavirus cases and growing risks to the global economy have some seasoned market strategists warning that U.S. growth could come to a halt this year and some Treasury yields may drop below zero for the first time.

The warnings come as a rout in equities and climbing expectations for rate cuts as soon as this week drove long-term Treasury yields to unprecedented lows. Over the weekend, a gauge of Chinese manufacturing plunged to historic lows amid a surge in global virus cases and fatalities — including the first in the U.S.

Money markets are pricing in a half-point rate cut by the Federal Reserve this month and an additional half-point by the end of July. These bets are building as investors see the U.S. economy slowing and potentially even slipping into recession by year-end. Scott Minerd, chief investment officer of Guggenheim Partners, said such expectations will push Treasury yields below zero for the first time.

“The shorter-term securities are going to be negative,” Mr. Minerd, who oversees about $215 billion, said Sunday. He said the 10-year Treasury yield could drop to as low as zero, though it would be hard to drop below that.

“Even if you have the 10-year note yield at 25 basis points, you are going to have the majority of the curve at negative rates,” he said.

The 10-year yield was still well above those levels Monday, at 1.07%, down about 8 basis points from the end of last week. Before last week, it had never been below 1.32%, a level it touched in 2016. Investors piling into Treasuries for safety have driven the 10-year rate down more than 80 basis points this year.

The stock of global negative-yielding investment-grade debt has jumped back above $14 trillion, from just under $11 trillion in mid-January. However, most of that is concentrated in Europe, where the European Central Bank’s benchmark rate is below zero. Negative rates have been long seen as an anathema in the U.S. 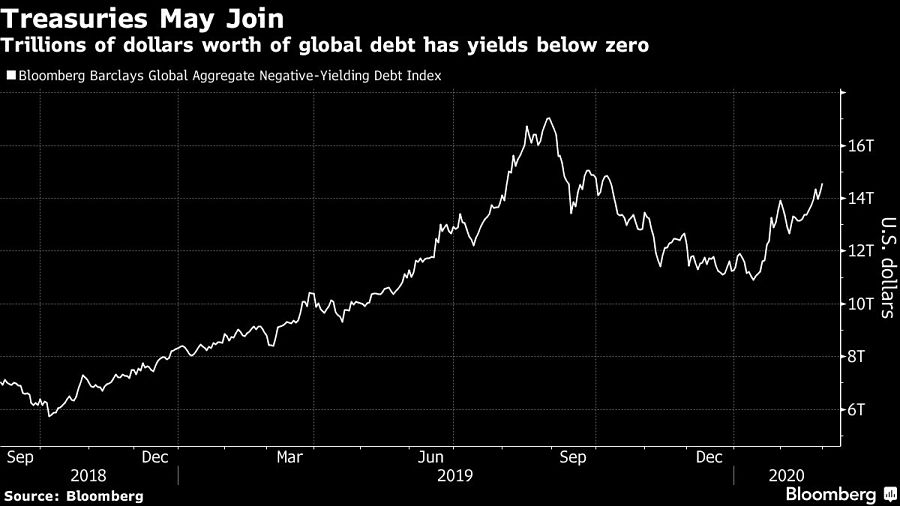 With the economic impact of the outbreak rippling across the globe, a slew of Wall Street economists have turned more pessimistic and penciled in Fed rate cuts.

The Fed, the Bank of Japan and the Bank of England have promised to act as needed to stabilize markets rattled by the coronavirus, as the OECD warned the world economy faces its “greatest danger” since the financial crisis.

So-called real yields on 10-year Treasury Inflation-Protected Securities have already been below zero for much of this year. They slid Monday to about minus 0.39%, their lowest since 2013. 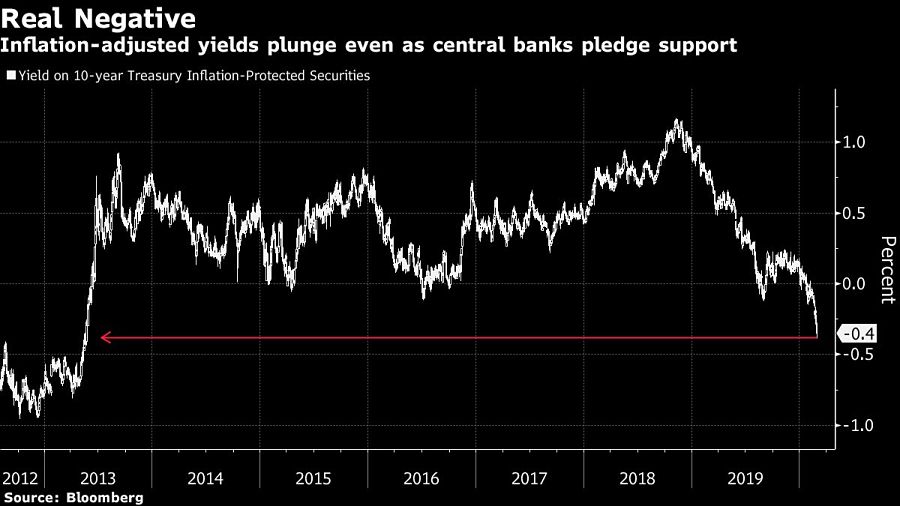 On Monday, the two-year Treasury yield fell to a level not seen since 2016. Traders see the Fed acting at least by its March 17-18 policy meeting. Fed Chairman Jerome Powell said in rare unscheduled remarks Friday that the bank would act if needed. Since then, the U.S. has reported its first two fatalities and the governor of Washington state declared a state of emergency.

“A decent part of the U.S. yield curve should end up in negative territory. The question really is only how far out the curve,” said Mr. Malvey, now counselor at the Center for Financial Stability Inc. He predicted negative rates are likely at least in the three-year maturity.

JPMorgan Asset Management has been reducing risk in portfolios by adding “high quality” duration and havens such as the yen and Swiss franc, according to its chief investment officer, Bob Michele. “Recession risk rises to become inevitable the longer these uncertainties persist,” Mr. Michele wrote in a note.

The news about the virus’s spread is destabilizing for markets, said Shaun Osborne, chief foreign-exchange strategist at Bank of Nova Scotia.

“There is probably a bit more of a shake-out to come overall,” he said. “Yields should fall further and the haven currencies to keep appreciating.”