Financial advisers know that after a decade-long bull run, it may be time to encourage clients to diversify their portfolios away from traditional investment vehicles that will face heightened volatility in a downturn.

For many, alternative investments are part of the solution. In a recently published InvestmentNews Research study, advisers overall projected an increase in their target allocation to alternative assets over the next three years.

Yet advisers may be disregarding their own advice. Three years earlier, they said much the same thing.

In the most recent study, advisers on average said their target allocation to alternatives – investments such as commodities, hedge fund strategies and private placements – would rise to 11% from 8% over the next three years. But three years earlier, respondents to a similar survey projected an increase to 12% from 9%.

Although the surveys did not necessarily poll the same advisers, the two samples were demographically similar and largely answered identical questions. Taken together, the data suggest that advisers have put off conversations about alternatives they know they need to have.

One of the most commonly held views of alternative investments among advisers is that they can help hedge against stock market risk. Of the advisers who planned to increase allocations to alternatives, 63% placed them within a strategy to protect client portfolios in the event of a significant decline in equities.

Similarly, 59% of advisers who do not recommend alternatives indicated that the need to reduce portfolio volatility could change their minds. 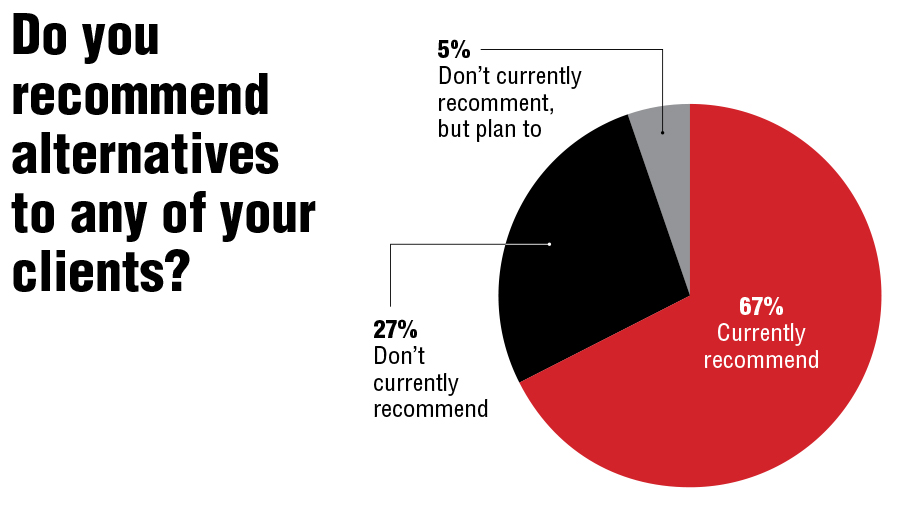 To be sure, directing more client assets into alternatives is easier said than done.

Our study, based on surveys of advisers and investors in 2019, found several impediments to the broader adoption of alternative investment strategies, including higher fees for some of these investments and client concerns about their lower liquidity. Large numbers of advisers also expressed misgivings about both their clients’ familiarity and their own knowledge of alternatives. 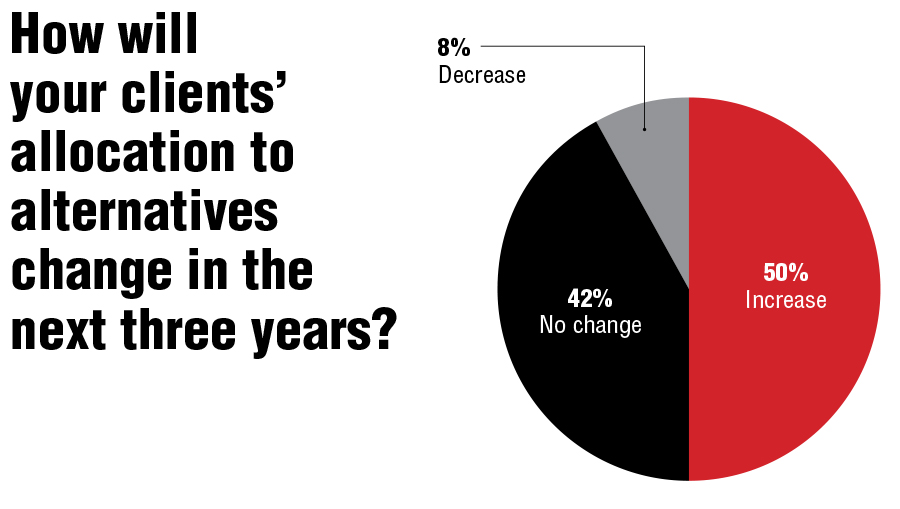 But the study also found that these impediments are far from insurmountable, and that clients could be persuaded if issues like fees and liquidity are properly contextualized by their advisers.

Investors may be coming around: About half of advisers say they expect their clients to increase investments in this space over the coming years.

Moreover, 51% of investors in the most recent survey said they would seek to execute alternative investment strategies through a financial adviser, preferring a professional intermediary to working directly with investment providers or through a digital platform.

Advisers may be forgiven for ignoring the uptick in client interest – and even their own plans – over a three-year period in which the S&P 500 logged an average annual return of 13%. But the bull run won’t last forever, and the full benefits of exposure to alternatives will go to those who act before the bull market loses steam.

For more information on alternative investments, download the FS Investments/InvestmentNews study “Reframing the Role of Alternatives.” If you have any input or ideas for upcoming research, please contact the IN Research team at [email protected]