In the asset-management industry, reputation is everything. A mutual fund manager might have a fantastic strategy, but without a steady stream of cash flowing in to set up the position, returns may come in weaker than expected. That, in turn, could lead some investors to lose confidence that the concept was ever great in the first place.

That, in a nutshell, is what happened to Franklin Resources Inc. over the last several years. The company has been stuck near $700 billion in assets under management for the past 18 months, down from a peak of $921 billion in mid-2014, while its competitors have grown steadily. Moody’s Investors Service downgraded Franklin’s credit rating in mid-2018 and last year “expressed concern that Franklin’s reputation for global/internationalstrategies and solid relative investment performance has been undermined.” That’s not quite a death knell, but it’s close. 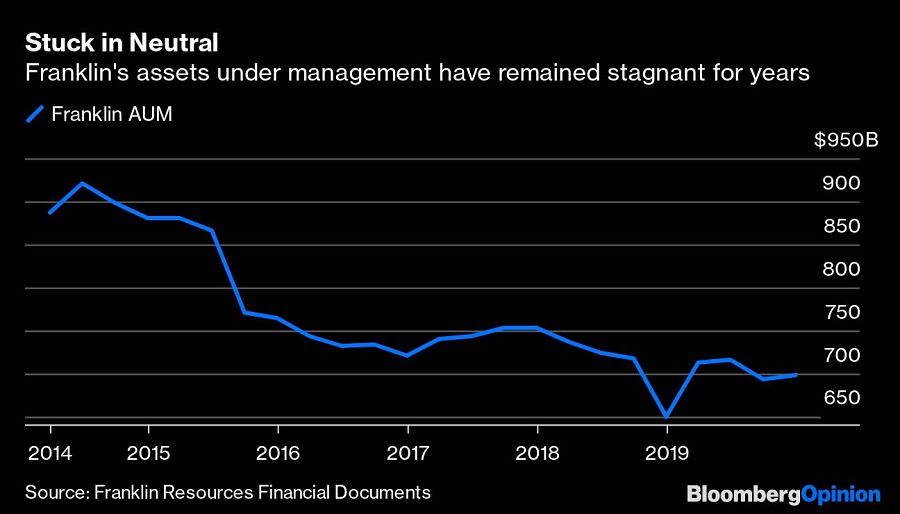 Faced with that grim reality, Franklin made the obvious move: It got bigger in a hurry. On Tuesday, it announced an agreement to acquire asset manager Legg Mason Inc. for almost $4.5 billion.

The deal would create a $1.5 billion behemoth whose size trails only BlackRock Inc., Vanguard Group Inc., Fidelity Investments, Capital Group Cos. and Amundi Asset Management among “independent asset managers,” according to Willis Towers Watson data cited by Franklin. It would leap ahead of Invesco and T. Rowe Price Group Inc. in this arms race. (The ranking format conspicuously excludes investing giants tied to Wall Street banks like Goldman Sachs Group Inc. and JPMorgan Chase & Co., or those affiliated with insurers, like Allianz Group and Prudential Financial.)

At first glance, the takeaway is that the entire asset management industry is consolidating because of the rise in passive, low-cost index funds, and Franklin’s move is just the latest example. While that’s true, the combination of these two companies in particular suggests that in the current investing landscape, fund managers can either choose to be the biggest or they can elect to remain small, nimble and specialized, but falling somewhere in the middle is purgatory.

Neither company is accustomed to being viewed as a second- or third-tier money manager. After all, Franklin, which leans into its affiliation with one of America’s iconic founding fathers, started in 1947, while Legg Mason’s precursor firm dates back to the 19th century. And yet both Legg Mason and Franklin have fallen way behind the top firms, and Franklin in particular was at risk of slipping even further away from the next group of asset managers.

Franklin’s website declares it’s “a global leader in asset management with more than seven decades of experience.” At what ranking does being a “global leader” no longer hold up? The company clearly wasn’t interested in finding out. 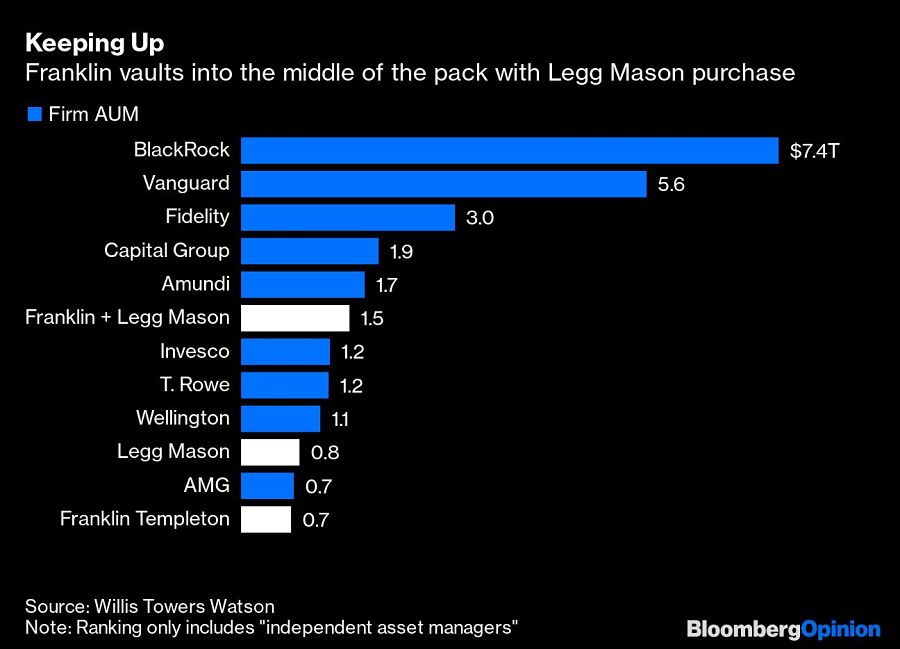 With the purchase, Franklin will strike an almost perfect balance between institutional and retail investors, which may help mitigate volatility in fund flows. Notably, it expects to maintain a nearly identical geographic focus, which is important given that some of its flagship offerings are worldwide in scope.

For example, the $26.3 billion Templeton Global Bond Fund holds a large position in Brazil’s bonds, and both Franklin and Legg Mason have a presence in Sao Paulo. Even as active managers grow, they need to retain their identity.

The acquisition also braces for an uncertain future. Legg Mason recently made headlines for announcing plans to take a majority stake in Precidian, known for its ActiveShares exchange-traded funds. If successful, the products could upend the mutual fund industry because they would trade daily and yet require reporting only once a quarter. Analysts have suggested some $7.2 trillion in mutual-fund strategies could work in this format. Franklin took too long to get on the ETF bandwagon years ago and appears eager not to make a similar misjudgment.

Now, one big move probably won’t be enough to bring Franklin back to its glory days. But by combining with Legg Mason, it at least has more than a puncher’s chance to reclaim its place as a leader in active management.

Traders certainly seem optimistic: Franklin’s shares rose as much as 13.3% on Tuesday to $27.60, the biggest intraday jump since November 2016.

The onus is now on Franklin’s fund managers to live up to their reputations. If there were any malaise in the air over in San Mateo, Calif., about the company’s future, management has alleviated it for now. Franklin is back in the game.