The United States Oil Fund again wreaked havoc on oil markets as it unexpectedly starting selling all of its holdings of the most active West Texas Intermediate futures contract, triggering a massive swing in the price relationship between the June and July contracts.

The changes, detailed in a regulatory filing, are the latest in a series of moves that have have roiled crude prices. The exchange-traded fund said it’s shifting its money to contracts spread between July 2020 and June 2021 due to new limits imposed upon it by regulators and its broker.

As the U.S. Oil Fund (USO) sold its June position, the contract plunged more than 25%, significantly widening the June-July spread, which has become a target for speculators. The fund appears to have come under heavy pressure from its broker, which it didn’t name, disclosing that in the future it will hold “significant portions of its portfolio in cash beyond what it has historically held in order to satisfy potential margin requirements.”

The largest oil ETF has changed its investment policy five times in the last two weeks. It also warned investors that its valuation may deviate significantly from the underlying oil price, in effect acknowledging that it’s momentarily less focused on the price of WTI crude.

“While it is USO’s expectation that at some point in the future it will be able to return to primarily investing in the Benchmark Futures Contract or other similar futures contracts of the same tenor based on light, sweet crude oil, there can be no guarantee of when, if ever, that will occur,” it said in the filing.

The $3.6 billion exchange-traded fund, run by United States Commodity Funds, will move its June position from Monday through Thursday, according to a filing with the Securities and Exchange Commission, each day roughly selling and buying one-third of its position. It also announced that it will move its contracts forward over a 10-day period beginning Friday, May 1, but didn’t disclose which will be affected. Previously, the fund typically rolled the contracts over four days.

In response to risk mitigation measures taken by its futures broker, the fund will invest approximately 30% of its portfolio in July contracts, 15% in August, 15% in September, 15% in October, 15% in December and 10% in June 2021.

The fund listed factors including “a change in regulator accountability levels and position limits” as part of its reasons for the shift. As a result, it will now struggle to meet its own investment objectives, it said. 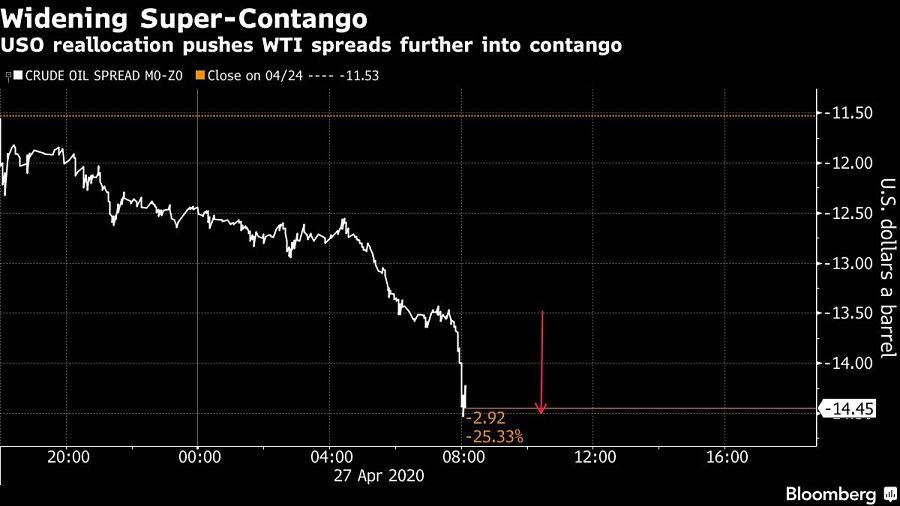 The discount between June WTI and the contract for December deepened sharply after the filing, reaching as low as $15.17 a barrel.

In recent weeks, the long-only oil fund has become a magnet for retail investors looking for a bottom to the historic price rout that’s pushed oil futures in New York into negative territory for the first time in history. The knock-on effects have impacted retail investors everywhere. While USO was not holding the May contract when it plunged below zero, traders pointed to retail money as having caused large gyrations in the market.

USO is not the only futures-linked instrument moving its risk away from the most active oil benchmarks. The Bloomberg Commodity Index will be rolling its July WTI contracts into September next month due to market conditions, according to a statement. Meanwhile, Samsung Asset Management (Hong Kong), which manages the Samsung S&P GSCI Crude Oil ER Futures ETF, said last week that it would sell its entire holdings of June and buy September. It warned investors that in a “worst case scenario,” the net asset value of the fund may drop to zero and investors may suffer “a total loss” of their investments.

But USO has quickly become a rich target for speculators that are able to take advantage of the moves by trading ahead of it, thanks to its detailed regulatory disclosures. By offering a detailed calendar and the exact contracts that it’s selling and buying, it enables others to place financial bets ahead, profiting from time-spreads movements.

On Friday, the fund disclosed for the first time that it was ordered by CME Group Inc. to make changes to its position. USO shares were down 42 cents, or 16%, to $2.15 a share at 1:04 pm in New York after touching a record low.