Stock bears rushed into leveraged ETFs this month, with inflows heading toward a record. Exchange-traded funds that use leverage to short equities have lured $5.6 billion so far in April, according to data compiled by Bloomberg. The influx is already the biggest since at least 2013, and defies a surge in equities during the month.

ProShares Short S&P 500 ETF (SH) which seeks results that correspond to the opposite of the performance of the U.S. stock benchmark, is on pace for record monthly inflows. Similar funds ProShares UltraPro Short S&P 500 ETF (SPXU) and Direxion Daily S&P 500 Bear 3X Shares ETF (SPXS) are also heading toward their best month ever. 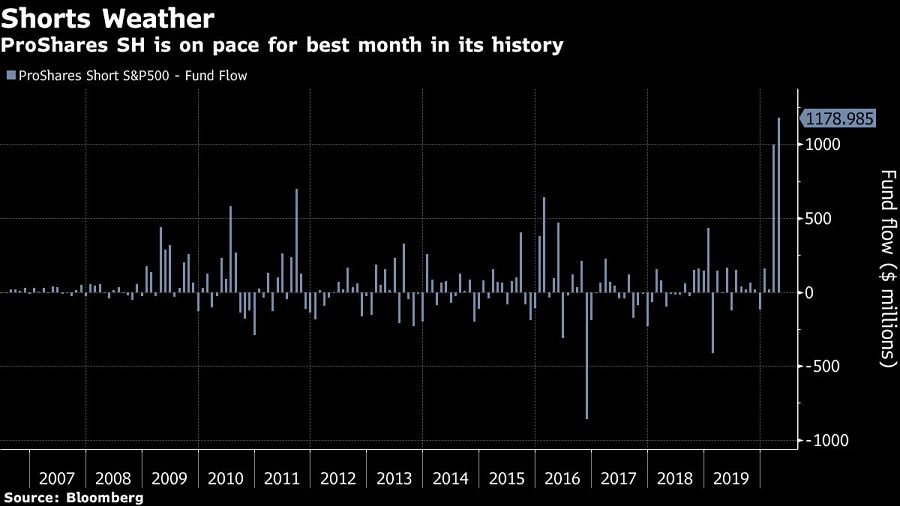 Despite the surge in inflows for those funds, stocks have recovered in April as governments lay out plans to ease shutdowns designed to fight the COVID-19 outbreak. The S&P 500 is up almost 30% from March 23, though it remains 15% off the record high set in February.

“Some investors believe the recent recovery in equity prices in the middle of a bear market will be short-lived, and they want to benefit when declines occur,” said Todd Rosenbluth, head of ETF and mutual fund research at CFRA. “While some parts of the economy are starting to open up, there are likely to be many bumps in the road before things return to normal.”

Commerce Department figures due Wednesday are projected to show gross domestic product shrank at a 3.8% annualized rate from January through March. Such a decline would be the steepest since just before the last recession ended in 2009. Meanwhile, brutal swings in oil prices have whipsawed markets as uncertainty lingers over how soon storage levels will fill to capacity with inventories ballooning.