Count Morgan Stanley’s wealth management clients among those who aren’t entirely convinced that the worst of the market turbulence is over.

The bank was the last of the top Wall Street firms to report first-quarter earnings, and its results Thursday were largely more of the same. It posted its best trading performance in more than a decade, helping to soften the blow across other divisions. The one area that Morgan Stanley could provide further insight was a peek into the minds of wealthy individual clients. It didn’t disappoint.

Jonathan Pruzan, Morgan Stanley’s chief financial officer, said in conference call with analysts that deposits increased by almost $30 billion in March alone, with people in its wealth management system shifting out of equities and into cash. “Most of that excess cash is un-deployed,” he said. “Our expectations are it will be sticky for a while.”

Gerard Cassidy at RBC Capital Markets snuck in a final question, asking Pruzan to elaborate on clients’ 23% cash allocation and when he’d expect them to start investing in equities or other risk assets again.

“That’s a great question, in terms of how our retail clients are going to re-engage with the market,” Pruzan said. “The 23% is cash or cash equivalents including money market and short-term fixed-income securities. That number is probably up 3 to 4 points in the last quarter or two and if you look at the totality of the money, the $2.4 trillion, the equity allocation has gone from 55 down to 50 and most of that has gone into this cash and short-term securities.

“How long people feel the need to stay in short-term and cash is going to be a function of some of the things we’ve been talking about on this call. People’s perspective on when the economy opens up again, or the work from home ceases and some of the restaurants and businesses get back into business and people feel more comfortable with the outlook,” the CFO continued. “That’s why we’re also not fully deploying those deposits, because again they are generally very sticky, but they’re also based on the investment decisions of our clients.”

It’s no secret, of course, that money-market funds have experienced huge inflows in recent weeks. Assets under management have grown by almost $1 trillion just since the end of February, reaching $4.47 trillion as of April 8, easily topping the prior record of $3.92 trillion in January 2009, according to Investment Company Institute data. 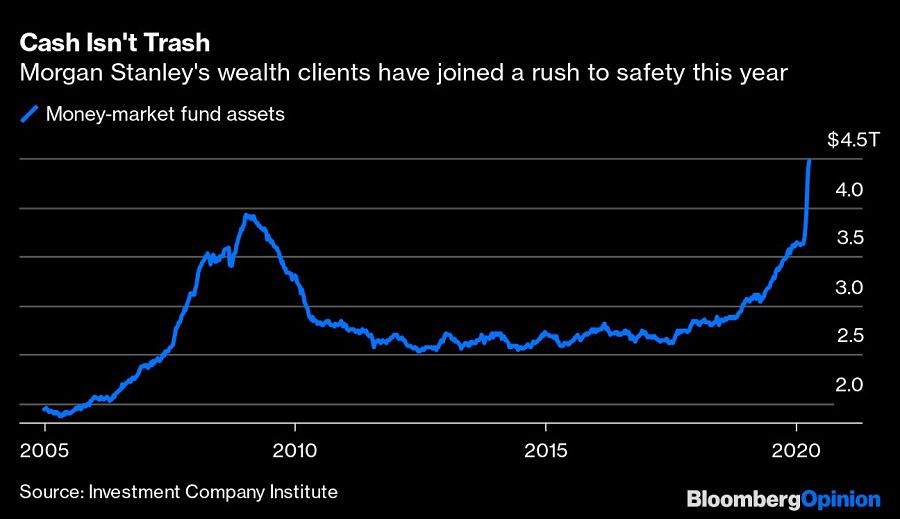 Still, you’d be forgiven for forgetting that many people are still skittish, given that the S&P 500 bounced back as much as 30% from its intraday low on March 23. Plus, it seems like every day another investment firm is raising billions of dollars for an opportunistic credit fund. Just on Wednesday, for instance, Bloomberg News reported that Fortress Investment Group is talking to investors about amassing at least $3 billion to wager on high-yield bonds and rescue capital situations, while Oaktree Capital Group is seeking $15 billion to start the largest-ever distressed-debt fund.

Morgan Stanley’s vantage point suggests a chasm between individuals and institutions in when and how they choose to allocate money during the economic crisis caused by the coronavirus pandemic.

As I wrote last month, distressed-debt funds have been sitting on cash for years waiting for the kind of chaos seen in credit markets during March. Their biggest fear is the best bargains will be gone in a few months. Indeed, Howard Marks, the co-founder of Oaktree Capital Group, wrote a letter this week blasting the Federal Reserve for buying junk-rated bonds under the guise of “moral hazard,” but reading between the lines it boils down to frustration that debt prices won’t tumble further and give his firm a chance to sift through the wreckage.

Who is backing these strategies? It’s hard to know for sure, but it’s well-known that underfunded public pensions have been focusing more on riskier corners of fixed income to juice returns. At the onset of the last recession, some turned specifically to distressed-debt investments. These are huge pools of money whose managers seem to think they can’t afford to wait until there’s an all-clear on the economy to start taking risks.

If Morgan Stanley is right, wealthy individuals will be more patient. That means watching these investors might just be the better indicator of when confidence in the U.S. and global economic outlook has truly taken a turn for the better. People who are well-off financially don’t need to be overly cautious. But they also don’t need to blindly swing for the fences and risk striking out.