The Federal Reserve’s planned foray into the $4 trillion exchange-traded fund market may be over before it ever began.

The U.S. central bank’s surprise announcement that it intended to purchase investment-grade ETFs as signs of a liquidity crunch mounted drove up demand from investors trying to front-run the central bank. The March 23 decree sparked a $5.7 billion stampede into high-grade funds in the weeks since, reversing a disconnect that saw the ETFs trade at a discount to the underlying bonds.

For now, the Fed’s signal alone has been enough to loosen the cash crunch that had been squeezing global bond markets amid spreading coronavirus fears. The high-grade credit ETFs traded at a premium to their net-asset values after selling off more quickly than their underlying bond holdings in the weeks prior. The same dynamic took place in junk-bond ETFs just a few weeks later after the Fed included high-yield debt in its plans. With the fixed-income market stabilized, the central bank may not have to step in, according to Franklin Templeton.

“Certainly anecdotally, finding buyers of the underlying bonds was becoming harder,” said David Mann, head of global ETF capital markets at the issuer. “The market has interpreted that announcement by the Fed as ‘OK, they’re going to be stepping in, so we can go back to normal,’ and if the threat of them acting was sufficient, then they don’t necessarily even have to act.” 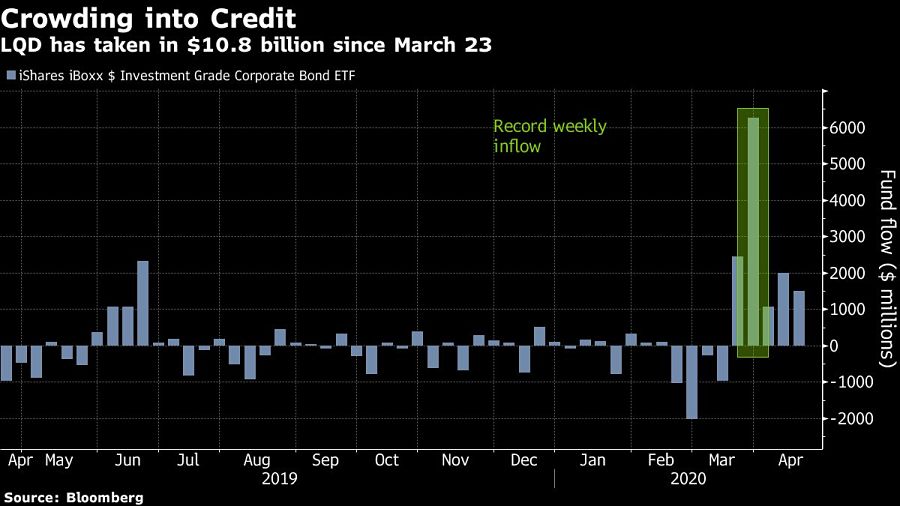 The Fed’s Secondary Market Corporate Credit Facilities allows the central bank to purchase up to 10% of an issuer’s outstanding bonds and up to 20% of the assets of eligible ETFs.

The Fed’s pledged foray helped restore order to the creation and redemption process, which keeps ETF prices in line with the presumptive value of their holdings. Normally, specialized traders known as authorized participants buy shares of a falling ETF in order to exchange for the underlying bonds with the fund’s issuer. That market maker will then sell those securities to pocket a virtually risk-free profit. The ETF’s price usually snaps back to the fund’s net-asset value as the supply of ETF shares is reduced.

Rampant volatility soured the appeal of that arbitrage opportunity as trading in the underlying bond markets effectively froze, with the ETFs trading at a steep discount as a result. Those price discrepancies were quickly repaired in the wake of the Fed’s announcement. LQD’s price closed 5% below its net-asset value on March 19, before soaring to a 5% premium on March 25. The fund is now trading a modest 0.7% above its net-asset value.

The Fed’s pledge also threw a lifeline to some of the biggest fixed-income mutual funds, which saw $240 billion of outflows in March. The withdrawals have slowed to roughly $34 billion in April. 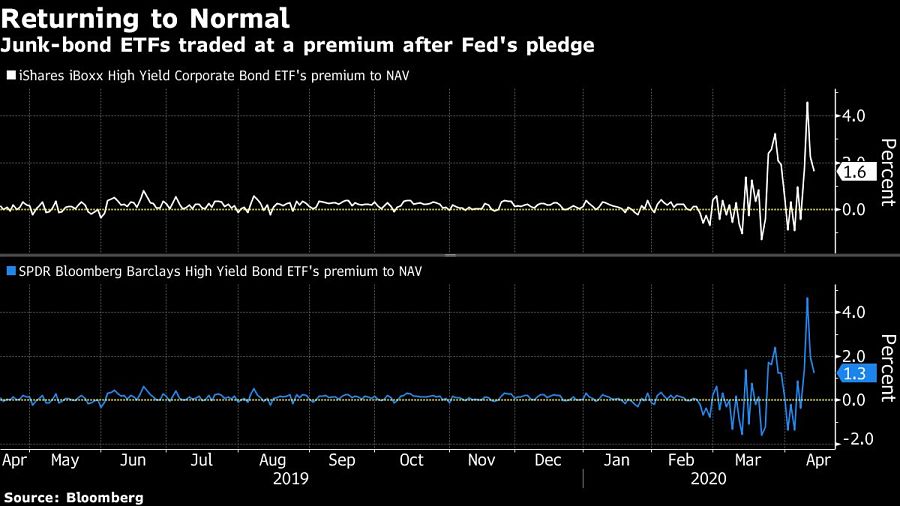 “Just stating their support and willingness to step into the market may have been enough to stop the outflows and prevent NAVs from printing down from both ETFs and mutual funds,” said James Seyffart, a Bloomberg Intelligence analyst.

As of April 10, the Fed has yet to make use of its new corporate bond buying program. Federal Reserve Bank of Chicago President Charles Evans said last week that the facilities were likely “a few weeks away,” and that the announcement alone has “helped provide support” for companies by reducing volatility in those markets.

In the meantime, cracks in the credit market continue to mend. New issuance in investment-grade markets has surged 67% ahead of last year’s pace, while speculative-grade borrowers have started to return to the primary market. With the “healing process” already taking place, the Fed may not have to follow through with ETF purchases, according to Barings.

“Unless that high-yield market rolls over and comes under additional pressure, the Fed may never venture into buying high-yield ETFs,” said Scott Roth, a high-yield portfolio manager at Barings. “The signal that they could buy may be enough to achieve its desired effect.”