As stocks posted their biggest weekly gain since 1974, skeptical Wall Street veterans shook their heads in amazement. But exchange-traded fund investors did what they always do — they piled in.

In only seven trading days this month, equity ETFs took in more than $16.5 billion, according to data compiled by Bloomberg. The torrid pace puts inflows on track to exceed the monthly total of $42.5 billion in December, when stocks rallied during what ended up being the tail end of an 11-year bull market.

The surge in stocks last week, when U.S. shares gained a combined $3.2 trillion, represents a bounce after the S&P 500 Index cratered 30% in March. Optimists, including mom-and-pop investors who use ETFs, are focusing on the massive fiscal and monetary stimulus meant to offset the impact of the pandemic, even as analysts predict one of the biggest economic contractions in U.S. history and the worst earnings season ever seen.

One explanation is that investors are already looking past the next two quarters after the S&P 500’s rapid decline of more than 30% in March, and are now focusing on the recovery and the economic support supplied by the massive fiscal and monetary stimulus measures. It’s a narrative that ETF investors, especially retail ones, have followed for duration of the sell-off.

“We saw a lot of emotional selling at the beginning of the outbreak, and it was mostly in very liquid vehicles,” said Chad Oviatt, director of investment management at Huntington Private Bank. “When you go back to risk on, you will start to see more flows into equity vehicles, whether that’s ETFs or mutual funds.”

ETFs used by allocators, who are typically longer-term retail investors and advisers, added $41.1 billion in the first quarter, while those favored by professional traders lost almost $27 billion. Flows into Vanguard equity funds, popular with mom and pop, are up almost 6% year-to-date.

A big contributor is the health care sector, which leads equity ETF flows with almost $3 billion added, as drugmakers race to find a cure for the new coronavirus and companies rush equipment to hospitals. 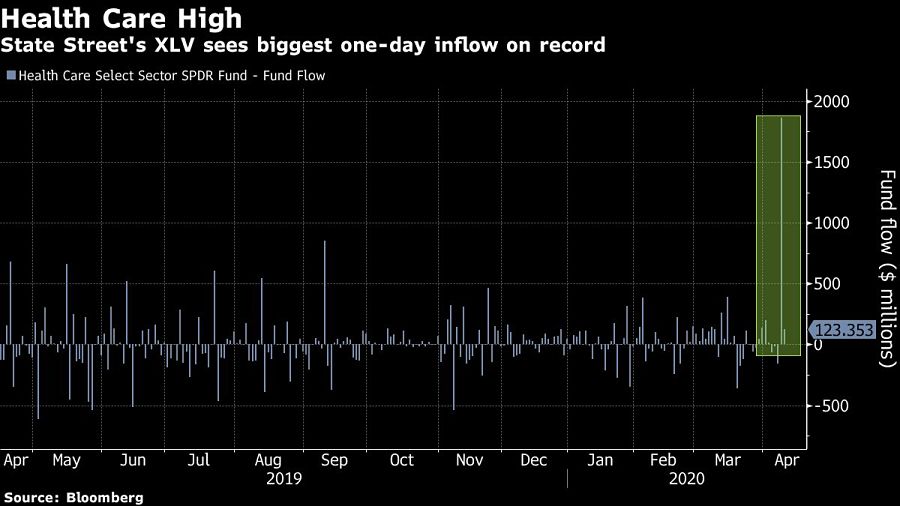 Still, a worse-than-expected earnings season or more negative news on the virus spread could quickly reverse the inflows. Bank of America Corp. analysts said it would be unparalleled if the stock market fails to retest lows.

“A lot of investors are looking at these moves and saying, are we going to test the lows?” said Lance McGray, head of ETFs at Advisors Asset Management. “If we do make a move lower, I think you could see some potential outflows. The next week or two are going to provide some color in terms of where we go.”