During the furious sell-off in stocks last quarter, ETF investors piled into equity funds. That’s troubling to bulls looking for an end to the rout.

Exchange-traded funds lured $66.3 billion during the first three months of the year even as the S&P 500 plunged as much as 34% from its record on the way to the worst quarter since 2008. The haul was about $8 billion more than ETFs attracted in the same period a year ago, according to data compiled by Bloomberg. Equity funds led the inflows, with a $41.8 billion intake. Fixed-income products added $11.8 billion.

After $5 trillion in value was wiped from U.S. stocks this year, Wall Street has become obsessed with finding an end to the rout. For bulls, a key prerequisite for a bottom is retail investors finding the losses are too big to bear. While the biggest ETF that tracks the S&P 500 did see outflows, a mom-and-pop darling, the Vanguard S&P 500 ETF, lured $18.7 billion.

“It tells me that investors are still trying to pick a bottom,” said Matt Maley, equity strategist at Miller Tabak & Co. “Bear markets usually don’t bottom out until most investors throw in the towel, so this news concerns me.” 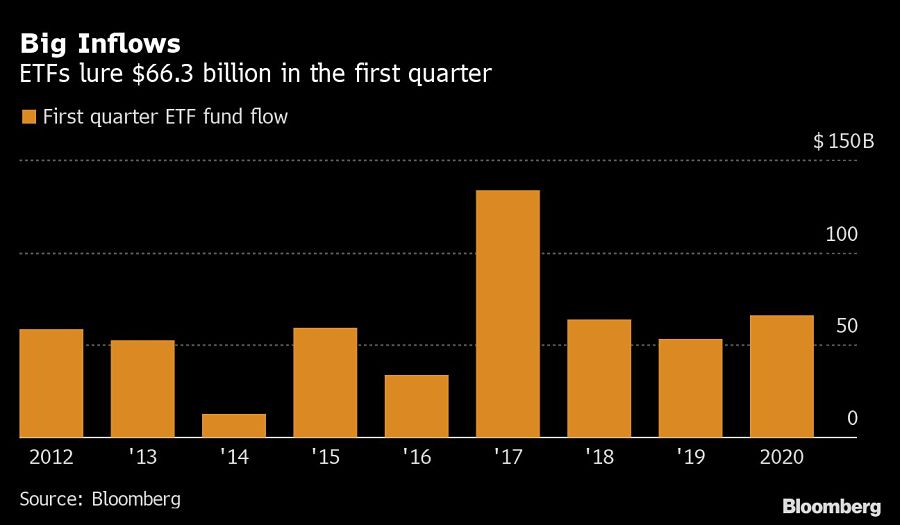 While VOO was clearly a big winner as retail investors are often the last ones to bail, a peer fund — SPDR S&P 500 ETF Trust, or SPY — lost $19.6 billion in that period. The $235 billion ETF is normally targeted by traders due to its high liquidity.

Another possible reason for the ETF industry’s big intake in the first quarter was the rush to fixed-income products. Those funds are normally seen as safer alternatives during challenging economic times.