The dramatic volatility in global markets made issuers in the almost $4 trillion exchange-traded fund industry slam the brakes this month.

As the coronavirus pandemic roiled the world, only four new ETFs started trading in March — the slowest pace since August, according to data compiled by Bloomberg. That’s a steep drop from the 29 funds that were launched in February, the best month since November 2017.

The reason behind the decline is simple: Companies are refraining from ETF debuts amid market turbulence. In addition, it’s harder for salespeople to market their new products when self-isolation measures are making it impossible to hold face-to-face meetings, according to UBS Global Wealth Management’s David Perlman.

“Given the market volatility and just the environment we’re in, it’d be pretty hard to raise assets,” Perlman said. “Advisers and analysts have more pressing issues than reviewing a brand new strategy right now.” 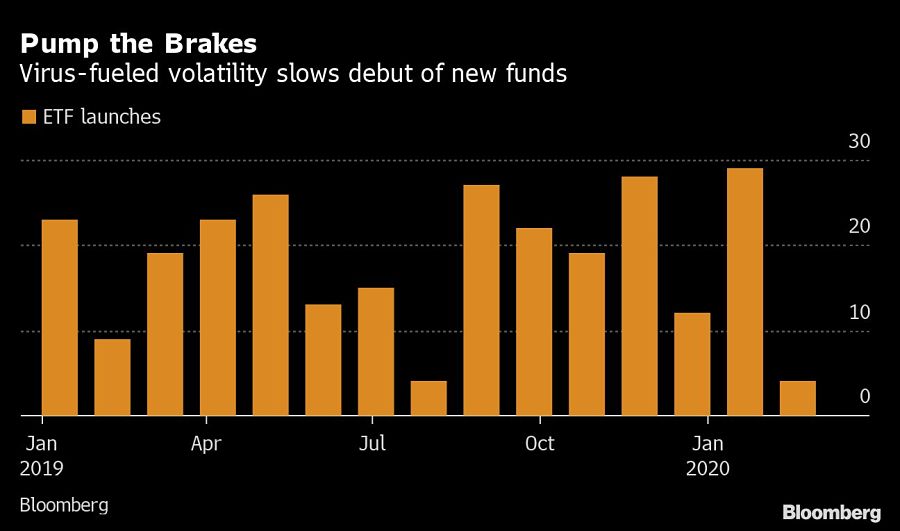 Innovator has been one of the few issuers to brave the waters in March, with a trio of U.S. stock “buffer” ETFs that seek to shield investors from a certain percentage of losses. The Esoterica NextG Economy ETF (WUGI) launched Tuesday.

The fact that the company delayed the launch of these new types of funds was likely to their benefit, according to Bloomberg Intelligence’s Athanasios Psarofagis. American Century said in May that it would license Precidian’s intellectual property for active nontransparent ETFs, after regulators cleared a pathway for the products in the previous month. The plan to launch Thursday likely shows they think markets will stabilize from here, Psarofagis said.

“They are making a market call and hoping to catch an updraft,” said Psarofagis, an ETF analyst. “Since these are active, their performance track record is going to be key.”