The Federal Reserve’s unprecedented step into U.S. corporate bonds helped cure many of the massive dislocations in exchange-traded funds — and may have saved mutual funds from a similar fate.

After prices for the biggest fixed-income funds held in a kind of dazed stillness during the worst of the sell-off — presumably because the bonds they owned simply weren’t trading — net asset values on some of them dropped precipitously early the week of March 16 as their outflows forced sales on a frozen market.

The $215 billion Vanguard Total Bond Market Index Fund and the $51 billion Fidelity U.S. Bond Index each saw the value of their holdings drop as much as 4.1% in the the week through March 20, according to data compiled by Bloomberg. Meanwhile, the $137 billion Pimco Income Fund posted a net asset value plunge of roughly 6.6% in the span — after largely holding steady over the past five years and outperforming 97% of its peers over the same period. 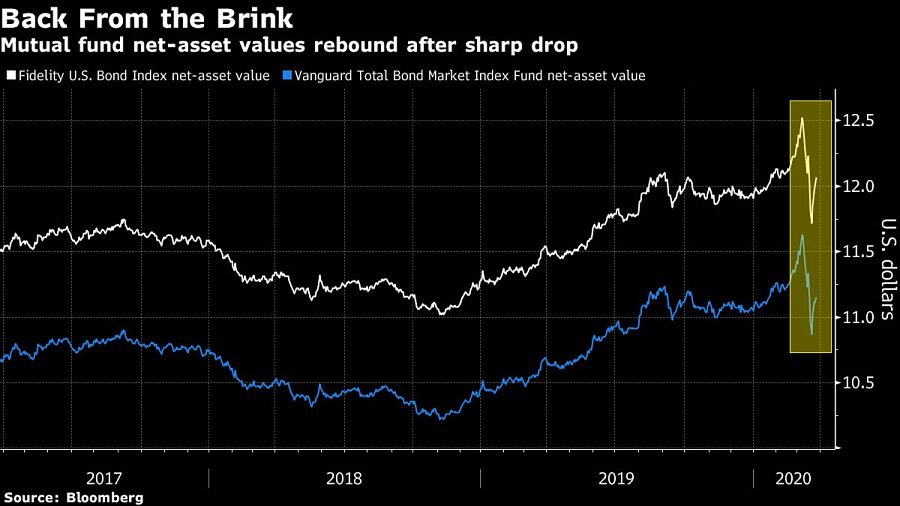 The steep declines were beginning to mirror prices reached in fixed-income ETFs, which were already trading at deep discounts to their underlying securities. Faced with $149 billion of redemptions so far in March — after not seeing a monthly outflow since January 2019 — mutual funds were forced to sell their holdings into a market caught in a cash crunch.

However, the Fed’s pledge March 23 to buy investment-grade credit and certain ETFs helped halt the slide in mutual fund net-asset values and sparked a rally in higher-rated debt. That’s largely due to the fact that fund managers now have a willing buyer on the other side of the trade, according to Bloomberg Intelligence.

“Mutual funds dodged a big bullet by not having to unload bonds into a market with no buyers,” said Eric Balchunas, senior ETF analyst. “The Fed has now brought liquidity, and so they will get to avoid the ‘hell’ we saw ETFs in for the past month.”

The U.S. central bank said March 23 that it would create a Secondary Market Corporate Credit Facility, one of several new measures aimed at cushioning the economic blow from the coronavirus. The terms of the facility allow for the purchase of up to 10% of an issuer’s outstanding bonds and up to 20% of the assets of any ETF “whose investment objective is to provide broad exposure to the market for U.S. investment-grade corporate bonds,” a primer accompanying the Fed action said.

That Fed’s move quickly stemmed the bleeding in high-grade bond markets, where investors were shedding even their highest-quality holdings in an effort to raise cash. The carnage quickly appeared in ETFs, which trade on exchanges and behave like stocks, as the funds sold off much more quickly than the underlying bonds.

The pain had just started to spread to mutual funds, which were initially able to satisfy redemptions by burning through cash and their more liquid securities, according to Kingsview Wealth Management’s Paul Nolte. The net-asset values began to drop as the fund managers were forced to try and liquidate harder-to-unload holdings into a market with few buyers — but the Fed announcement broke the cycle, he said.

“They’ve stepped in, and we’re now finally starting to see a little bit more of a normal bidding process in the market,” said Nolte, a portfolio manager at Kingsview. “We’re probably a week away from a normally functioning market. It’s going to take some of these funds a while to work their way back to where they used to be.”

The impact was immediate for many fixed-income ETFs.

After trading at a discount as deep as 5% to its net-asset value in the week through March 20, the $36.6 billion iShares iBoxx $ Investment Grade Corporate Bond ETF (LQD) closed at a premium of 3.2% to its underlying holdings last Thursday, while just six bond ETFs ended with a discount of 5% or more. That compares to 37 funds on March 20, according to data compiled by Bloomberg. Meanwhile, 214 fixed-income ETFs closed at a premium.

Easing corporate-default fears have stoked an investment-grade rally after the coronavirus outbreak reignited solvency concerns. While the Fed’s pledge of support is a positive, rating downgrades are “inevitable” even with the central bank’s backstop, according to Charles Schwab Corp.’s Kathy Jones.

“There’s going to be more credit risk than there was a year ago,” said Jones, chief fixed-income strategist at Schwab. “There’s going to be some problems from a fundamental point of view, but I think you could wade back into the IG market and say, ‘I feel confident with the higher rated companies.’”