Goldman Sachs Group Inc. has effectively bowed to pressure from the continuing rally in U.S. stocks and abandoned its call for another steep sell-off.

Strategists led by David Kostin have rolled back their prediction that the S&P 500 would slump to the 2,400 level — over 20% below Friday’s 3,044 close — and now see downside risks capped at 2,750. The U.S. equity benchmark could even rally further to 3,200, they wrote in a note Friday.

“The powerful rebound means our previous three-month target of 2,400 is unlikely to be realized,” the strategists wrote. “Monetary and fiscal policy support limit likely downside to roughly 10%. Investor positioning has oscillated between neutral and low and is a possible 5% upside catalyst.” 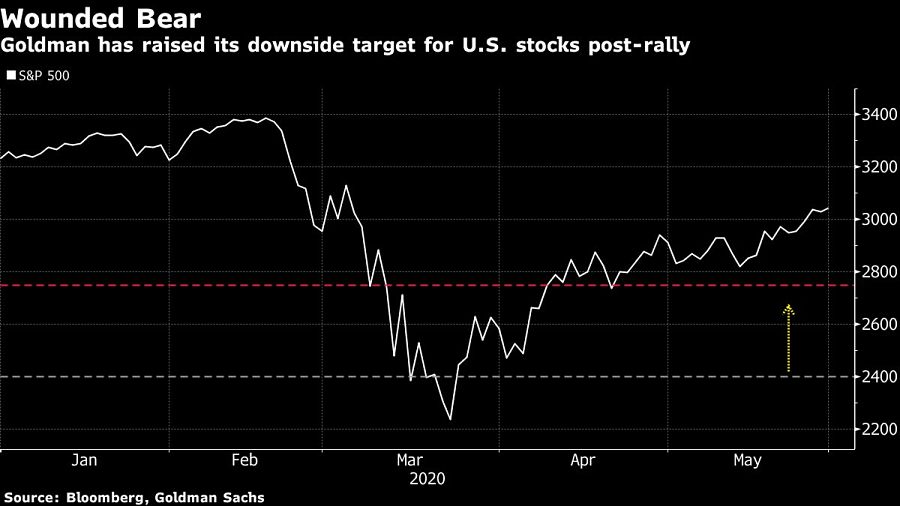 The shift came just after JPMorgan Chase & Co.’s strategists shifted in the other direction — reining in their bullish outlook. JPMorgan’s Marko Kolanovic warned about rising U.S.-China tensions in a note Thursday.

Goldman’s strategists maintained their year-end target of 3,000 for the benchmark U.S. stock gauge.

Goldman continues to argue that short-term returns are skewed to the downside — “or neutral at best” — thanks to the risk of an economic, earnings, trade or political “hiccup” to the normalization trend. A broader participation in the rally would be needed for the S&P 500 to move meaningfully higher.

The S&P 500 has climbed 36% from its March 23 low, helped by massive fiscal and monetary support, mega-cap outperformance and optimism about the economy restarting, according to Goldman. Last month it argued that fear of missing out was a key driver of the rebound in stocks.