Think the sizzling U.S. stock rally is excessive in an economy frozen by shutdowns? From one perspective, it’s just getting started.

Giant piles of cash sloshing around the financial system means there’s substantial ammunition yet to push risk assets higher. JPMorgan Chase & Co., meanwhile, sees the potential for billions to flow into equities at the expense of bonds to rebalance portfolios. Money-market funds have lured $1.2 trillion this year, while fund managers with $591 billion overall are holding cash at levels rarely seen in history, according to Bank of America Corp.

All that shows how much firepower investors have to support the market at a time when stock prices look unhinged from fundamentals like corporate profits, and as trade frictions between China and the U.S. return to the forefront.

“Investors are still underweight equities and signs of overextension are confined to momentum traders,” JPMorgan strategists led by Nikolaos Panigirtzoglou wrote in a note. “There is still plenty of room for investors to raise their equity allocations.”

JPMorgan says the equity allocation of nonbank investors — a group that includes households, pensions, endowments and sovereign wealth funds — will probably rise to 49% in the coming years, given the backdrop of low interest rates and high liquidity. Currently, the proportion is 40%. 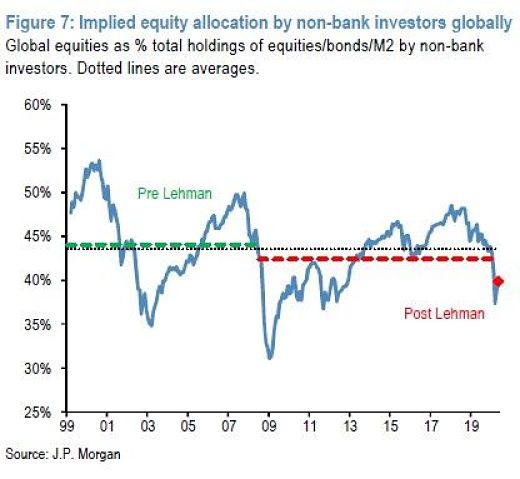 Just ask John Roe, the head of multi-asset funds at Legal & General Investment Management. He started buying more shares recently after finding few opportunities in credit. Roe sees a self-reinforcing rally as higher prices draw more buying and positioning, but he’s having to look past his concerns that the pandemic will causing lasting damage to the economy.

“Equities have reached a range where we worry about self-reinforcing momentum,” Roe said. “It’s very tough when we are fundamentally negative and think the scarring risks are underappreciated.”

Another sign of cautious sentiment: Investors are deeply short the market, so there’s potential for stocks to rally when they cover their positions.

Speculators have built up the largest net short position on S&P 500 futures since late 2015, according to regulatory data. Short interest in the world’s largest exchange-traded fund — which tracks the U.S. stock benchmark — is also still hovering close to its peak in March, according to Markit data.

Among retail investors and the like, risk appetite may be returning gradually.

U.S. stocks and credit funds recorded stronger inflows in the week through Wednesday, according to EPFR Global data cited by Bank of America. At the same time, flows into money funds slowed and government bond funds saw redemptions for the first time in six weeks.

So who’s buying? Certain breeds of quants, for one. Momentum traders, like commodity trading advisers, are the only overextended part of Wall Street, according to JPMorgan.

By its estimates, the momentum signal for U.S. stocks has returned to elevated levels. The last time the overbought signal was this stretched was near the beginning of this year, just before stocks plummeted. Even so, profit-taking by momentum investors is unlikely to derail the bull market, JPMorgan strategists said, given low equity allocation by other kinds of investors.

As for other quant investors, Nomura Securities projects that U.S. volatility-control funds — which target a particular level of price swings — are finally piling into stocks again as the market calms. Their estimated equity exposure remains around the second percentile in data going back to 2010, meaning that it was lower just 2% of the time, strategist Charlie McElligott wrote in a note.

In sum, with the S&P 500 trading at a two-decade high versus the coming year’s earnings, stocks might look pricey. But few investors have actually poured their cash in.