Gold-backed ETFs are on pace for a record haul in a year that’s seen some funds tracking oil futures founder.

Investors have poured unprecedented amounts of cash into gold exchange-traded funds, with inflows totaling $16.8 billion in less than five months and set for a record year, according to data compiled by Bloomberg. 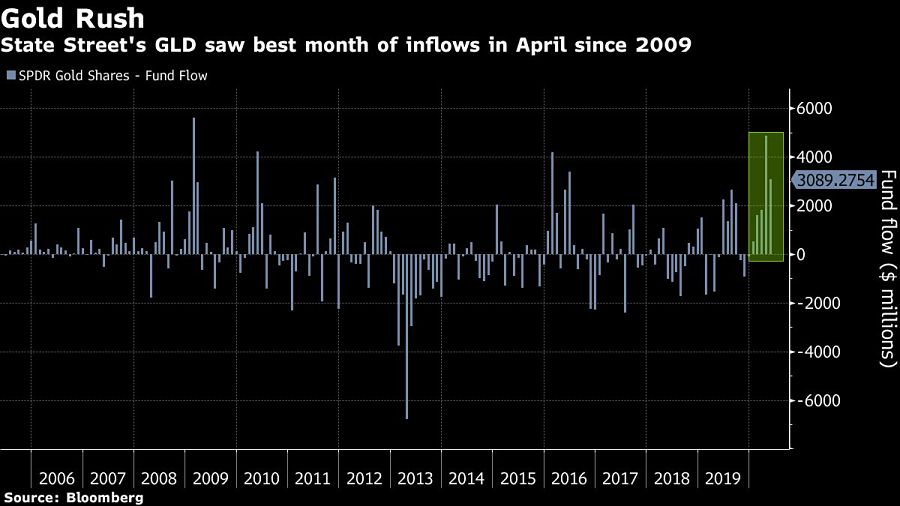 Gold funds are drawing a surge in interest partly because they’re backed by actual bars of the precious metal, which means they’re better able to track the underlying asset’s spot price when markets go haywire. Compare that with the futures-backed United States Oil Fund (USO), which was forced to take a series of unusual steps to survive amid a plunge in the crude contracts. WisdomTree suspended a swaps-based inverse oil offering in April, while ProShares Capital Markets liquidated two leveraged crude ETFs a month earlier.

“I would put a big line in between physically backed commodity ETFs and the ones that use futures and have to roll them,” said Eric Balchunas, ETF analyst for Bloomberg Intelligence. “In the worst case scenario, they deliver gold to your door. That’s a different situation than a barrel of oil.” 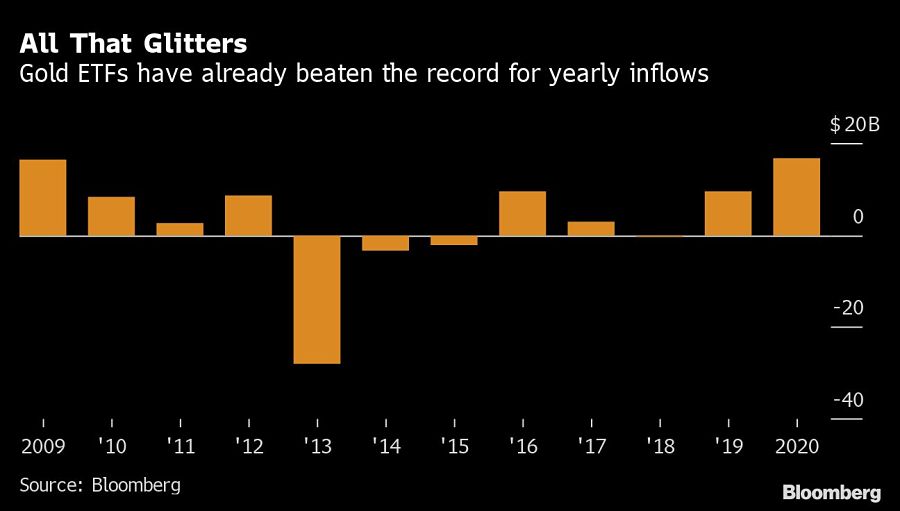 For George Milling-Stanley, chief gold strategist at State Street Global Advisors’ SPDR ETFs business, part of GLD’s popularity stems from the trust investors have in the product, knowing that real gold backs up their holdings. Milling-Stanley helped create the fund back in 2004 while working at the World Gold Council.

“We found out early that the only way to guarantee that there’s no tracking error is to only own the underlying,” he said. “If you’ve got cash in there, you’re going to diverge from the course of the price of the underlying. So we decided we would have no cash, no derivatives, pure and simple 100% backed by gold.”

State Street’s gold is stored in a vault in London accredited by the London Bullion Market Association and three registered security carriers. The $63 billion stockpile takes up just one corner of a vault in an system that stores bullion on behalf of central banks, sovereign wealth funds, and other institutions, Milling-Stanley said.

Contrast that to USO, which was revealed to be far from a straightforward bet on the direction of oil prices. After years of tracking the front-month oil contract, the fund repeatedly rolled forward its holdings to longer-dated futures and warned it may see “significant tracking deviations” to its benchmark. Its issuer has said that it’s unclear if USO will ever be able to return to tracking the front-month contract.

The episode raised questions about how much of the oil futures market USO controls and its ability to impact prices. At different stages, the fund held about a fifth to a quarter of the May and June contracts. USO said on Thursday that it’s currently unable to buy more oil futures following intervention from regulators in three countries.

“With the synthetic ETFs, there is more of a tracking difference between what the underlying is and what the ETF’s unit price is, so that’s where investors probably need to do a bit more due diligence and understand the risks involved,” said Kanish Chugh, co-head of sales at ETF Securities.

John Love, chief executive of the United States Commodity Funds, which manages USO and other commodity ETFs, declined to comment.

Meanwhile, most gold ETFs are backed by the metal itself, instead of futures contracts, meaning the chance of a similar meltdown to USO is slim, Chugh said. The physical spot price of gold would have to become negative.

Although gold futures ETFs do exist, they’re much less popular than their physically-backed counterparts. For instance, Invesco DB Gold Fund has $154 million in assets.

“The advantage of a futures-based ETF, if it works well, is there are no costs of holding and storing the commodity, but again the biggest risk is the ETF has to replace futures before they expire,” said Sylvia Jablonski, managing director of capital markets at Direxion Shares.

For Todd Rosenbluth, CFRA Research’s head of ETF and mutual fund research, the benefits of the fund versus holding the actual gold is that it’s easier to trade the ETFand to add or reduce exposure during market hours — compared to finding a buyer for bars of gold.

Inflows into gold funds are expected to continue this year amid worries about currency debasement as a result of the unprecedented stimulus from the Federal Reserve. Others fear the stock rebound will fade as economic data show the dire impact the coronavirus shutdowns have had on the nation’s economy.

Michael Cuggino has been adding gold to his holdings this year. Although his mutual fund owns physical gold, the portfolio manager at Pacific Heights Asset Management recognizes the benefits of the ETF format.

“Owning gold physically can be a hassle. You have to pay storage and insurance,” he said. “Those are spread across a wide range of investors in an ETF, provided they have physical gold.”