Money-market mutual funds, the ultimate havens for investors looking to preserve capital, once again are trying to maneuver in a zero interest-rate environment. The problem this time? They’re sitting on twice as much cash.

Assets in money-market funds have soared to a record $4.77 trillion amid a flight to safety by investors this year. More than three-quarters of that is parked in Treasury-only and other government funds perceived to be the least risky, Investment Company Institute data show, in part because of regulatory reforms in 2016 that triggered an exodus from prime funds.

Giants of the industry like Vanguard Group and Fidelity Investments already have done what’s known as “soft closes,” shutting down some funds to new investors. Speculation is swirling that management fees may be waived eventually by some companies in the industry. And managers are getting creative with their investments. It’s all an effort to preserve some sort of positive return for clients, a task that may get more difficult as traders start to bet on a negative Federal Reserve benchmark rate.

“Within a Treasury money fund, in particular, you get squeezed into a pretty small box in terms of what your opportunity set is,” said Joe Lynagh, head of cash management at T. Rowe Price, which manages $55 billion of money market funds, about $25 billion of which is in client-facing government funds.

The Treasury has issued more than $1.5 trillion of bills to fund its stimulus programs and plug the hole in tax receipts amid the economic fallout from efforts to contain the coronavirus. While this has provided a much-needed supply of assets for money funds to buy, yields are razor-thin and the Fed’s benchmark rate is anchored near 0% for the foreseeable future.

The crush of flows into money market funds came even as the funds’ own yields approach zero. Last year, yields on the funds were above 2%. These days, the average yield of the 11 largest government funds is about 20 basis points, and the average for the 11 biggest prime money funds is 64 basis points, according to State Street Global Advisors. 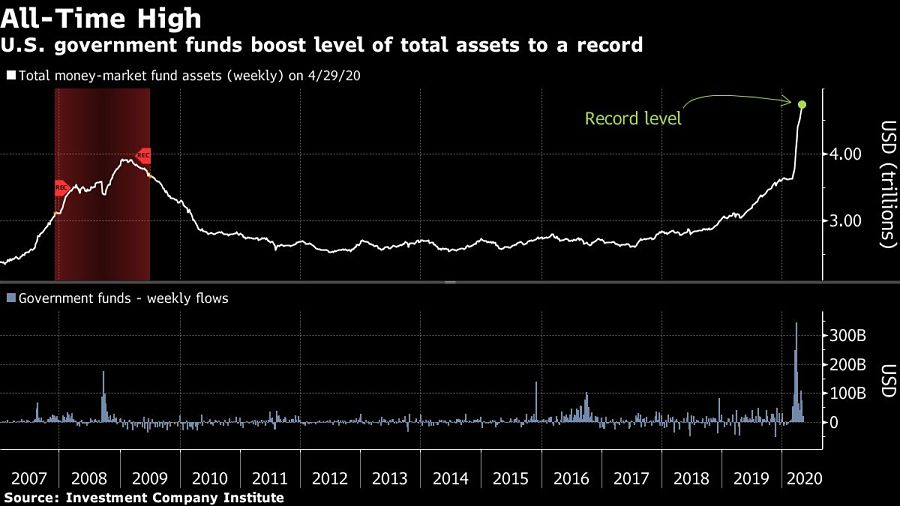 When rates were near zero during the recovery from the global financial crisis, some fund companies waived management fees in order to preserve returns for clients. That could happen again, said Will Goldthwait, global cash and fixed-income strategist at State Street Global Advisors.

“Clearly, there’s a revenue challenge as yields drift down to zero,” Goldthwait said. “I hope that we’ll see a reasonable recovery sometime in 2021 and the conversation about the Fed raising rates gets started again.”

Some managers like Lynagh aren’t considering soft closes, even as the low-rate environment poses a challenge for the medium term as economists forecast a lengthier recovery from the recession.

It’s not just the risk of lower-for-longer T-bill yields — profits from lending in repo markets have also been reduced.

Lynagh is adjusting as best he can. He’s finding value in two-year floating-rate Treasury notes. And to expand his options in secured lending, he uses sponsored repo — where dealers grant access to Fixed Income Clearing Corp.’s cleared repo platform rather than burdening their own balance sheets. The last resort, he says, is stowing cash in the Fed’s overnight reverse repurchase operations at a rate of 0%.

One place to find better returns is in the agency-backed mortgage space, said State Street’s Goldthwait. Another option for money fund managers is to buy short-dated Treasury coupons, or notes and bonds that are close to maturity and fit the funds’ maturity profile. However, caution is warranted since those aren’t the most liquid assets and money funds are relied upon to be highly liquid.

‘Only so much creativity’

“After that, there’s only so much creativity you can do in those portfolios given permissible investments,” he said.

Still, with trillions of dollars of developed-market debt trading with yields below 0%, Goldthwait said he’s encouraged that the Fed has pushed back on negative interest rates. But until he sees signs of recovery, he said, “there’s going to be some pain that’s felt both by clients and fund managers.”

“One of the handful of questions I got is, ‘When are yields going to zero?’” Goldthwait said. “This is cash. This is just the cost of owning cash, and you gotta be there.”

JPMorgan Chase strategists led by Alex Roever said in a note to clients last month that there are concerns over whether the supply of Treasury bills will remain as robust as it’s been over the last few months, leaving money-market funds to operate with lower yields for some time.

On the other hand, there is reason to believe that the crush of flows into money funds may subside.

One reason is that the federal tax deadline was pushed back from April 15 to July 15,, which could result in outflows from funds then by corporations that need to pay their tax bill.

While seasonal trends suggest money market balances tend to peak in the second half of the year, this year they could go higher in the near term, Roever said. But the “need to spend” by companies with cash in the funds will bring them down soon after, he said.

“If you think of a company that has ongoing expenses, and right now they may not be bringing in normal revenue, expect them to draw on their MMF shares and deposits.” he said. “They’ll need to take some of that cash and spend it.”