After suffering unprecedented dislocations, junk-bond ETFs are back to winning over investors.

High-yield exchange-traded funds are on track for their best month of inflows since 2015, attracting $5.2 billion, according to data compiled by Bloomberg. BlackRock’s iShares iBoxx High Yield Corporate Bond ETF (HYG) is set for a record monthly influx after adding $3.6 billion. 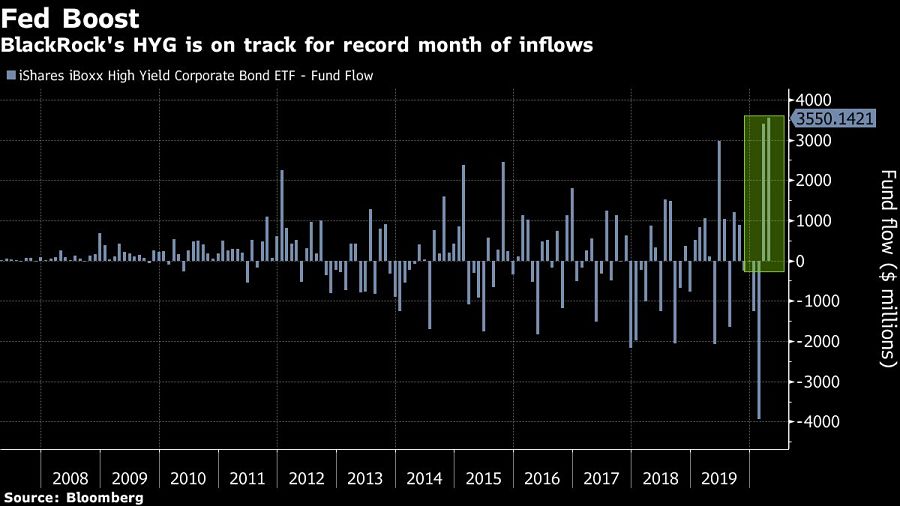 Earlier this month, the Federal Reserve expanded the scope of its bond-buying program to include a limited amount of recently downgraded high-yield debt and the ETFs that track them. While most of the purchases will be aimed at funds focused on investment-grade debt, “the remainder will be in ETFs whose primary investment objective is exposure to U.S. high-yield corporate bonds,” the Fed said.

That’s boosted inflows into the funds tacking those securities, such as HYG. State Street’s SPDR Bloomberg Barclays High Yield Bond ETF (JNK) has added $1.3 billion, and Xtrackers USD High Yield Corporate Bond ETF (HYLB) is on pace for its best month since its inception. Meanwhile, U.S. high-yield debt is having its best month since January 2019, and BB-rated securities — the tier most affected by the Fed’s move — are up the most since 2009.

“Even if they don’t end up buying a ton of high yield, just the fact it was mentioned gives investors a lot of comfort, if they know the Fed is going to be potentially in there buying as well,” said Brian Price, head of investment management for Commonwealth Financial Network. “That’s a very powerful element, that the Fed can and will step into those markets.”

The Fed’s backstop has helped ease fears about “fallen angels,” or companies downgraded to speculative grade. Fidelity estimated that roughly $215 billion of U.S. debt could lose its investment-grade status this year, with the energy sector most at risk, as coronavirus shutdowns continue to cripple global markets.

The news was a welcome reprieve for the funds, which saw their cash prices trade at steep discounts to the value of their underlying assets in March. An overall move toward risk assets and a search for yield amid low interest rates is also benefiting the junk-bond market.

“You’re seeing with a backstopping of those companies, that means that, well, the risk isn’t as bad as people thought and so why not pop on in, ride it up and take advantage of that high yield,” said Thomas Martin, senior portfolio manager at Globalt Investments.