Rich Americans are taking advantage of an unprecedented opportunity, made possible by the coronavirus pandemic, to transfer money to their children and grandchildren tax-free.

Thanks to the 2017 Republican tax overhaul, it was already easier than ever to avoid the U.S. estate and gift tax, a 40% levy on the biggest fortunes. Now, plunging interest rates and volatile equity markets are creating a once-in-a-lifetime chance that’s keeping wealth advisers busy even as they work from home.

“Our phone is kind of ringing off the hook,” said Jordan Waxman, managing partner of Nucleus Advisors. “There really hasn’t been a better time to plan.”

Key interest rates set by the Internal Revenue Service for estate-planning purposes have never been as low as they are starting this month. For example, the so-called Section 7520 rate, determined each month based on a formula, fell to 0.8% in May from 1.2% in April. It had been well above 2% for most of last year. The previous low for the rate, which applies to many popular trust strategies, was 1% in January 2013. 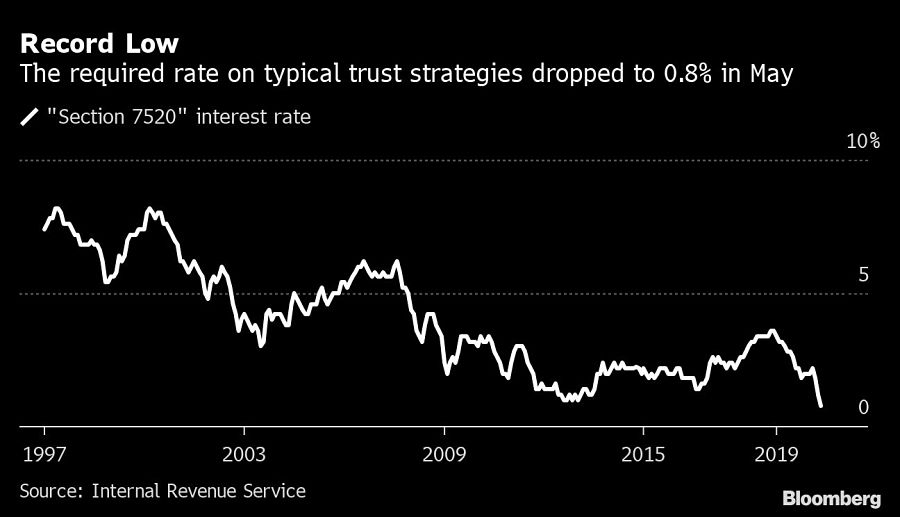 The simplest way for the rich to take advantage of the low rates is to loan cash or other assets to family members. Heirs can borrow millions of dollars, then invest the money and profit from any upside.

Beneficiaries can lock in today’s ultra-low rates for years or even decades. The IRS-required rate on “mid-term” loans of 3 to 9 years is 0.58% in May. The rate on longer-term loans — which can last 20 years or more — is 1.15%.

David Stein, a partner on the private client and tax team at Withersworldwide, said many people he helps are deciding to take out longer-term loans, preferring to pay a bit more in interest to guarantee a historically low rate for decades.

Falling rates enhance other sophisticated estate planning strategies, especially those that rely on loans to trusts. The advantage of these techniques, as well as simpler loans, is that they don’t eat into any of the estate and gift tax exemption — the amount that Americans can transfer to heirs without triggering the tax. The 2020 exemption, which was doubled as part of 2017 tax law, is $11.6 million for individuals and more than $23 million for married couples.

An especially popular tool is the grantor retained annuity trust, or GRAT, which lets beneficiaries profit from any future investment gains — with no risk of losing money — as long as those returns are higher than the IRS-required interest rate. The lower the rates, the easier for heirs to make money.

Low rates aren’t the only reason advisers say they’re preoccupied with rearranging clients’ estate plans. While volatile markets have dented many portfolios, low valuations also make it possible to transfer assets to heirs without using up as much of the gift-tax exemption.

In 2020, Americans will inherit an estimated $764 billion and pay an average tax of just 2.1% on that income, according to a study by New York University law professor Lily Batchelder earlier this year.

“If you think Trump is a one-term president, you would be doing even more of these transfers now,” said Megan M. Burke, an accounting professor at Marist College.

So far, the super-wealthy aren’t so hurt by the crisis that they worry about giving away too much, Stein said. “For most of our clients, their assets are way more than sufficient to weather the storm and then some.”

In fact, pandemic-induced lockdowns mean that many once-busy rich people find themselves with lots of time to maximize estate plans. Stuck at home, wealthy entrepreneurs finally have a moment to think about the next generation.

“It’s a little crazy — I’m busier now than I was before this pandemic,” said Jim Bertles, managing director at Tiedemann Advisors. “It’s because clients and prospective clients reaching out to us have a lot of time on their hands.”