In the Roaring ’20s, the Dow Jones Industrial Average jumped 500% from August 1921 to September 1929. It then plunged 48% from Sept. 3 to Nov. 13, 1929. To many, that seemed like a reasonable correction of the 1920s exuberance. The economy was fully employed and growing rapidly, and most looked forward to more expansion and higher stock prices. Only days before the crash, prominent economist Irving Fisher said that “stock prices have reached what looks like a permanently high plateau” and the market was “only shaking out of the lunatic fringe.”

Also, a 48% stock drop wasn’t exactly unique. The Dow fell 48.5% from Jan. 19, 1906, to Jan. 7, 1907, in conjunction with the Panic of 1907. Still, the economy didn’t collapse and stocks steadily recovered to close at the Dow’s old high by the end of 1909. If it hadn’t been for what followed, the 1929 Crash would probably have been recorded as just one more correction in the wild stock markets at that time. Despite the widespread interest in equities back then, only 10% of Americans owned equities in the 1920s, according to the Federal Deposit Insurance Corp. 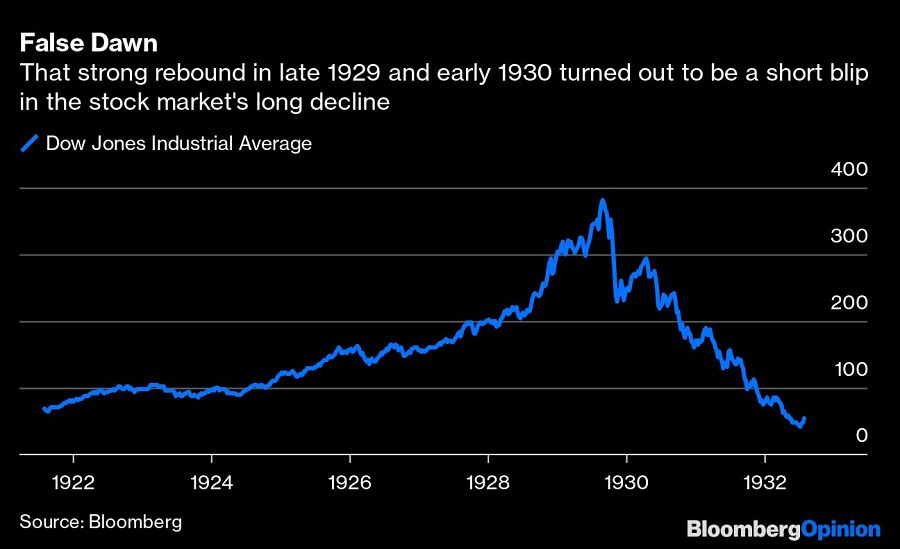 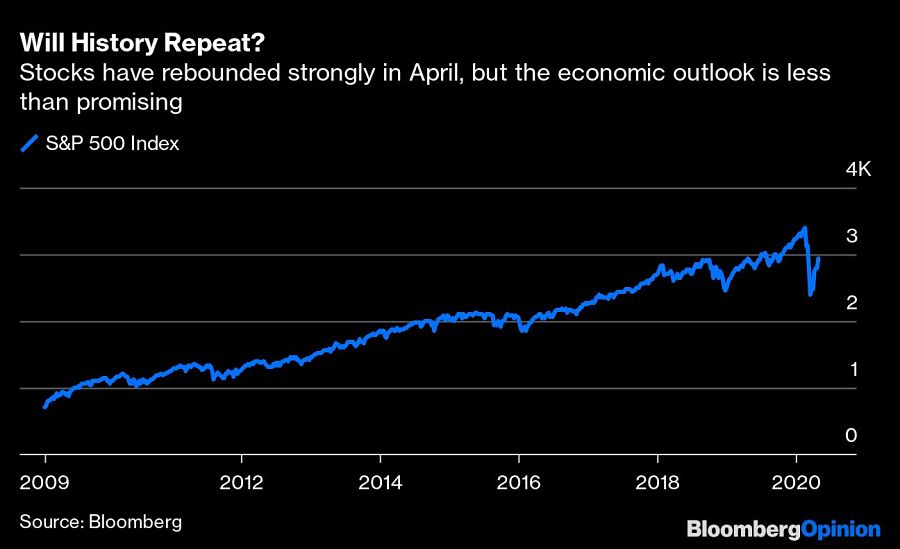 This looks like a bear market rally, similar to that in 1929-1930, with an additional 30% to 40% drop in stocks to come as the deep global recession stretches into 2021. In contrast, many look for a V-shaped economic rebound, with a sharp recovery starting in the second half of 2020. A Bloomberg survey of economists foresees the economy contracting 3.7% this year before expanding 3.8% in 2021, far above the 2.3% growth rate in the previous expansion.

But bear markets that accompany recessions last about 11 months, far longer than the recent slump. According to Bank of America analysts, the U.S. stock market has never reached its bottom in less than six months after falling more than 30% in the face of a recession.

The gigantic monthly and fiscal stimulus employed so far, with more to come, are unlikely to offset the massive disruption of the coronavirus pandemic. Recall that after the Great Recession, the Federal Reserve’s decision to cut its benchmark interest rate to essentially zero coupled with the huge quantitative easing did little to spur the economy, which grew at the slowest rate of any post-World War II expansion. Ditto for the gigantic 2009 tax cuts, rebates and massive federal spending, which together amounted to 6% percent of gross domestic product.

The total decline in stock wealth I foresee will knock 2.8% off consumer spending. This pandemic is likely to be the most disruptive financial and social event since World War II, with equally long-lasting consequences. Many will no doubt restrain spending in future years to rebuild savings, especially since the crisis caught them at a time of high debts and short financial reserves. A Fed study found that 40% don’t have enough cash on hand to cover an unexpected $400 expense.

A widespread economic revival is unlikely until a vaccine and widespread testing are available. Reestablishing supply chains will also be a slow process. And, as seen with China’s reopening, a lack of demand from domestic and foreign customers slows the revival. The lack of international coordination to fight the coronavirus also suggests a long recession.

In the world we foresee of slow economic growth and massive debt overhang, every country wants to export more to promote its local economy and none are zealous for imports. So global supply will continue to exceed worldwide demand, resulting in an even bigger savings glut and making chronic deflation a serious probability. In the last two decades, consumer prices in Japan have fallen in most years and, as a result, real GDP growth has averaged just 1.1%.

A. Gary Shilling is president of , a New Jersey consultancy.