Many investors who are within 20 years of retirement have reacted to the current market conditions by selling target-date fund assets.

In March, about $9.4 billion flowed out of target-date funds in vintages 2035 and lower, with the biggest outflows coming from funds dated 2020, according to a paper published Thursday by Morningstar Inc.

Meanwhile, net inflows to 2040 target-date funds were slightly positive, and new sales into longer-dated funds were larger, according to the report.

“It’s another sign of how scared people got in March,” said the report’s author, Jason Kephart, a senior manager and research analyst for Morningstar. “It was the fastest 20% [stock market] decline ever, and you had so much uncertainty.” 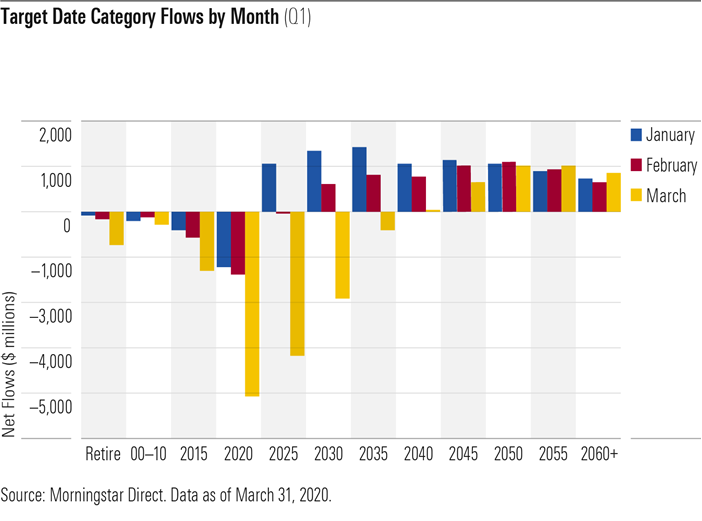 Outflows from target-date funds that have reached their target dates are expected, but not at that rate, Kephart noted.

“It definitely seems like people are pulling [money] out faster,” he said.

The effect of the market drop and COVID-19 was seen even in 2025, 2030 and 2035 vintages, with investors pulling money from all three. That is significant because target-date funds are intended to be long-term investments, and investors typically do not withdraw assets so far from the products’ maturity.

The sell-offs could mean that investors locked-in losses, instead of giving their assets time to recover.

“Time is your friend in a situation like this,” Kephart said. “No one can call the bottom. No one will know when it’s really safe to get back in. The further you are from retirement, the better off you are just staying in.”

The recent findings contrast somewhat with information from retirement-plan record keepers, some of which have reported that their participants have remained calm amid the volatility.

About three-quarters of investors recently surveyed by Empower Retirement said they have no plans to sell their investments or cash out of plans, the company wrote in a March 31 report.

A separate analysis of the company’s 9.4 million participants over 30 days showed that 99.3% did not make any changes to their retirement investments, according to Empower.

The recent target-date sell-off could have implications for product design, which generally considers longevity, Kephart noted.

“A lot of target-date fund glide paths are based on this assumption that investors in target-date funds are more likely to stay the course,” he said. “I wonder if this will change anything about where the equity allocation should be at the target date.”