They are among the companies most devastated by the pandemic, like casino operator Golden Nugget Inc. and Royal Caribbean Cruises Ltd.

Yet in a stark sign of how the Federal Reserve has swept away normal standards of risk, investors are pouring billions into funds that buy up the debt of such companies -– all rated junk and in many cases, distressed.

The buying’s been going on for 10 straight weeks, ever since the central bank unleashed an unprecedented effort to help stabilize the economy. That included plans to buy corporate bonds, which were later expanded to include even some rated junk. Remarkably, while the the Fed has yet to buy a single corporate bond, its word, as well as fat yields, have been more than enough to entice investors.

“There is an expression that you should never fight the Fed. But what the market has learned is that you do front run them,” said Matt Freund, head of fixed-income strategies at Calamos Investments.

The strategy has worked for investors. U.S. high-yield bonds have gained more than 21% since bottoming in late March, and the universe of debt considered distressed has shrunk to about $401 billion, from $935 billion the day after the Fed’s $750 billion bond-buying program was announced, data compiled by Bloomberg show. Junk bond yields have dropped nearly 1.7 percentage points since the beginning of May, to 6.35% on Thursday. 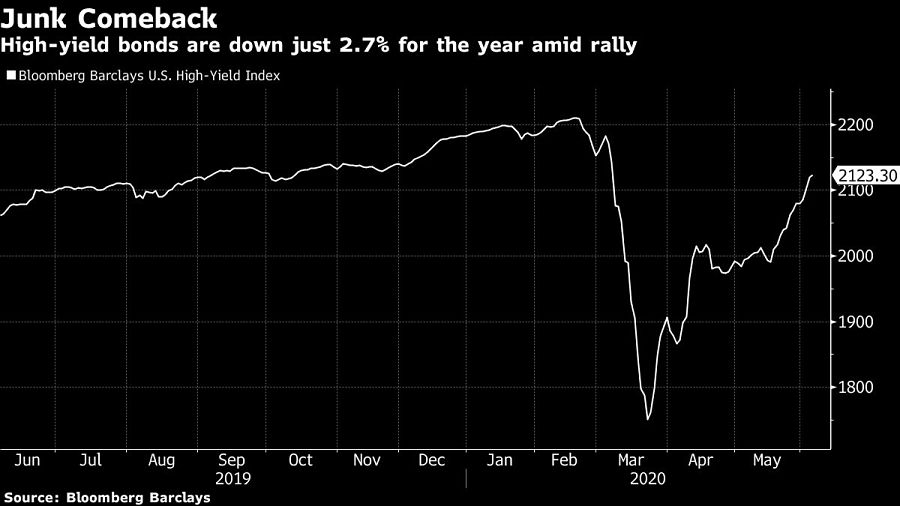 The latest sign of bullishness came Thursday as data from Refinitiv Lipper showed that investors poured $5.7 billion into funds that buy junk bonds, the fourth-largest inflow on record.

Investment-grade debt has benefited as well from the Fed’s promise of support. Investors plowed a record $9.9 billion into investment-grade debt vehicles in the week that ended Wednesday, Refinitiv Lipper data show. Including funds that invest in high-yield bonds and loans, inflows were a record $15.6 billion, beating the previous peak of $13.8 billion just a week ago.

While the Fed hasn’t purchase individual bonds, it revealed last week that it had bought some $1.3 billion of exchange-traded funds, including $223 million of high-yield bond ETFs. In doing so, it became an indirect owner in such heavily indebted companies as Chesapeake Energy Corp., Sinclair Broadcast Group Inc.’s regional sports networks and Golden Nugget, the casino business of billionaire Tilman Fertitta. 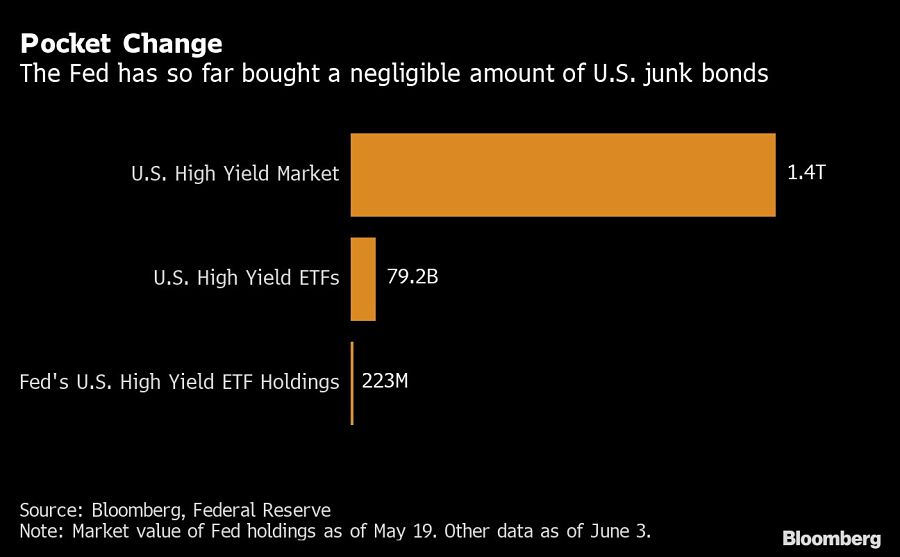 Even some companies that have filed for bankruptcy, including retailer J.C. Penney Co., are part of the mix. Triple C-rated bonds, the riskiest tier of junk, have outperformed investment-grade debt, returning about 18% through Thursday since the Fed’s intervention on March 23, compared to 14.5% for high-grade corporates.

“Despite only modest actual purchases by the Fed, the actual market reaction has been unquestionably strong. Investors are treating the Fed’s new put in corporate credit as a game changer,” Bank of America Corp. strategists Oleg Melentyev and Eric Yu wrote in a report Friday. They expect Fed corporate bond purchases to stay minimal “in light of overheating market conditions.”

Some of the debt the ETFs hold doesn’t pass muster for the Fed to buy individually. The central bank’s bond-buying program restricts it from holding insolvent companies, for example, and securities issued by non-U.S. firms. The limitations have some investors questioning whether the Fed’s influence could have its limits.

Staples thinks the rally could cool if the Fed ultimately doesn’t end up buying many individual bonds. But he’s bullish on the prospects for investment-grade and high-yield corporate debt for now, more as a result of the potential for central bank buying than his belief in the strength of company earnings.

The last time that money flowed out of the junk-bond market came just as the Fed announced it would start buying corporate debt.