Morgan Stanley strategists added a bet on a steeper Treasury yield curve, seeing the potential for a “regime shift” in the wake of a rapidly improving U.S. economy.

“In the blink of an eye, that seems about how quickly the economic narrative has tilted in favor of a V-shaped recovery versus a slow and prolonged one,” Guneet Dhingra, head of U.S. interest rates strategy in New York, wrote in a June 5 note. 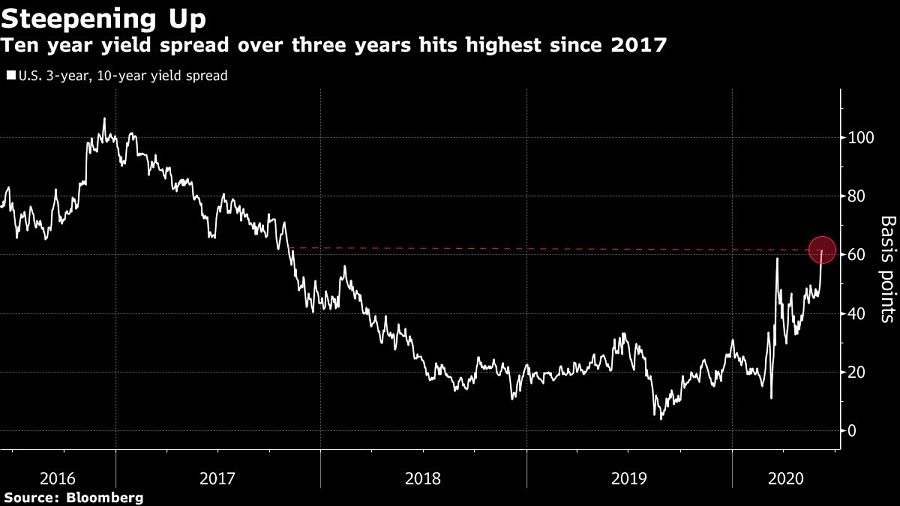 “If upcoming data confirms the strong improvement in the labor market in May, curve steepening could continue as strategic trade,” Dhingra wrote.

Ten-year yields jumped by almost a quarter percentage point last week as bond investors came closer to their equity colleagues’ enthusiasm about the U.S. economy reopening. The increases have raised discussion about whether the Federal Reserve might adopt the kind of caps that its counterparts in Japan and Australia have adopted for sections of the yield curve.

Morgan Stanley hypothesized that the Fed might “look to push back” against market pricing after another 25 to 30 basis points of gains in 10-year yields. The yield was around 0.9% as of 7 a.m. in New York Monday.

Still, the Wall Street bank doesn’t anticipate that the Fed will adopt yield-curve control or some other form of explicit forward guidance at Wednesday’s policy meeting. Morgan Stanley economists see a shift to a monthly quantitative easing target of $80 billion. The Fed is also likely to “maintain optionality,” or keep its room to maneuver, on QE going forward, the analysts wrote.

An announcement in line with these expectations isn’t likely to provoke much of a reaction in Treasuries, the bank’s strategists said.